Your columnist is, for the moment, depressingly single. On the downside, this means a slew of interesting failed dates that would be better suited for Deadspin’s Drunken Hookup Failure feature. On the upside, this means a similar bounty of new and interesting people to meet and get to know even if the result is a spectacular crash and burn in the romance department. 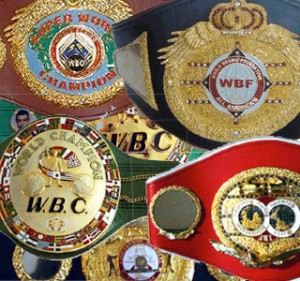 It is in this spirit that a smart, funny, drop-dead gorgeous, awesome woman gave me the inspiration for this week’s column (yes, I intend to have her read it, and yes, I’m so completely shameless it’s a wonder I don’t collapse under the weight of my own audacity. I never said otherwise. At least I’m sincere.) While writing the Cornelius Bundrage piece that ran yesterday, and while explaining the concept of paper champions to someone who had no exposure at all to the Sweet Science, it occurred to me just how screwed up boxing is.

We all take for granted the WBO and WBC and WBA and IBF and LMNOP and WKRP In Cincinnati and all the other major and minor titles bandied about like so many trinkets in a curio box. A well-schooled fight fan can even tell you which parent organization deals with the USBA and NABF and NABO and NABA (if you can do this without Googling, go buy yourself a chicken dinner). For the particularly naïve or paid off by Golden Boy among us, there’s even the Ring Magazine title, which lost what little legitimacy it had left when it changed its championship policy recently (not that it’s had any legitimacy since that whole brouhaha with Don King in 1976, but never mind that.)

Once in awhile, you even get the Ultimate Showdown of Ultimate Destiny (minus Mister Rogers in a bloodstained sweater); a trinket unification. On Friday Night Fights back in April, Adonis Stevenson beat Noe Gonzalez by second-round KO and for his trouble claimed the WBC Silver, IBF Inter-Continental, NABA, and NABO championship belts, in the process managing to secure his ranking for potential world titles in the WBC, IBF, WBA, and WBO respectively. This makes him, in theory, the mandatory challenger to Andre Ward, Carl Froch, and Robert Stieglitz, and possibly makes him have to fight an eliminator against recently-vanquished Lucian Bute. Rumor has it he will fight all four men plus four challengers to his own belt simultaneously in a Battle Royale with Cheese at the Bell Centre in Montreal with Samuel L. Jackson in character as Jules Winnfield as the ring announcer.

Now once again, try explaining all of this (or even just the four major sanctioning bodies) to a non-boxing fan who has resigned herself (perhaps with a sigh) to potentially dating a guy for whom boxing is a very big part of his life. Explain to her that a guy (Alexander Povetkin) can walk into the ring claiming to be the heavyweight champion of the world when everyone and their dog knows that he is nothing of the sort except in the eyes of the WBA. Even people who should know better will repeat that fiction. Teddy Atlas himself, who was still training Povetkin, crowed about getting his fighter a world title shot against Ruslan Chagaev, never mind that title shot had only been left open for Povetkin by virtue of Atlas convincing him to duck a challenge from Wladimir Klitschko, the real champion.

Every time she gave me a question with a theoretical yes-no answer (like “OK, so there are basically four leagues and fighters go up the ranks in each?”), the best answer I could come up with was “sort of”. Even something as simple as the fifth-ranked fighter defeating the fourth-ranked fighter could lead to any of a variety of outcomes, from the fighter getting a vacant championship belt to the same fighter ending up ranked no better than fourth while having to fight a guy ranked below him just to hold onto that particular distinction lest he be dropped down in the rankings as if he’d lost that mandated fight. All of this would happen without consultation or opportunity provided to the guys ranked one through three, who could find themselves dropped to two through four as the former number five became number one and the guy who used to be fourth could be ranked anywhere from fifth to fifty-fifth or, if the fight was close, even moved up by virtue of putting up a strong performance in a losing effort.

At the end of the conversation, I could tell from her tone that there was a distinct “I’m almost sorry I asked” approach to my attempts to explain the vagaries of boxing’s ranking structure and who gets to be the champion to her. And this is before I even started to explain something as simple as throwing a jab or anything else that actually happens in a boxing ring.

We all wonder why boxing “is dying” (it isn’t, but it’s such a popular narrative that the facts shouldn’t get in the way of a good story). We bemoan the sanctioning bodies and the promoters and the judges and call for a national commission. I’ll say boxing is reformed when guys can explain boxing to girls without having to pull more end runs than a pre-forward-pass Notre Dame football team. As it currently stands, I’m only marginally better off as a boxing writer than I would have been as an accountant when answering questions about what I do for a living on first dates. That’s just plain wrong.

Fox Doucette covers Friday Night Fights for The Boxing Tribune. His weekly column, The Southpaw, appears on Thursdays. Fox would like to thank his exceptionally patient conversation partner Jennifer for providing the inspiration for this week’s column (and takes full responsibility for anything that was either embellished or misremembered from that discussion.) Fan mail, hate mail, and females can be sent to beatcap@gmail.com.