Having only been out of action for the last two months, the Cuban born Erislandy Lara still manages to fly under the radar of most boxing fans. Last seen absolutely annihilating ‘name’ fodder Ronald Hearns in the very first round of their bout on the undercard of the Jermain Taylor/Caleb Truax snoozer, the junior middleweight contender seems to be on track for an impending title shot. Finding willing quality opponents to face the dangerous lefty, however, seems an entirely more difficult task than one would imagine. 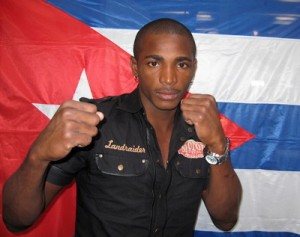 Some will remember Erislandy “El Oro de Guantanamo” Lara (16-1-1, 11KOs) for beating the holy dog shit out of the much larger Paul “The Punisher” Williams in July of 2009.

Perhaps the massive hematoma he sustained in that robbery defeat stuck out as more memorable to some – It definitely did to the judges who awarded the largely one-sided drubbing to Williams via majority decision.

That shady adjudication was such an outrage that the New Jersey State Athletic Commission actually stepped up and suspended the three judges  indefinitely (an extremely rare instance of justice in the sport of boxing).

Lara is a former Cuban amateur standout, winning several national and world championships; he was well on his way to being a favorite in the 2008 Olympic games in Beijing, China, but instead attempted to defect with Cuban teammate, Guillermo “El Chacal” Rigondeaux during the Pan-American games held in Rio de Janeiro, back in 2007.

The two fighters were subsequently picked up by authorities in Brazil and deported back to Cuba; Lara would be banned from fighting for his homeland by Fidel Castro. Two years later, though, the pair of boxers would again defect; this time they successfully escaped the communist-held island by speedboat and traveled to Mexico for their liberation – and to begin their respective professional boxing careers.

A genuine threat to any of the champions at 154 and 160 pounds, Erislandy Lara has one tool that shines above all his other numerous gifts – his dominant left hand. With laser like precision, Lara is able to bypass the large majority of his oppositions defenses and land this damaging punch almost at will.

“When you have results like that [referring to Lara’s face-seeking surgical left hand] you don’t need a second weapon…or even a plan B.” – Al Burnstein, Showtime boxing analyst –

The southpaw straight left can be one of the most effective weapons in the game when coming from an educated pugilist. Considering a large percentage of boxers fighting in the United States are orthodox (left foot forward), lefty fighters with a good punch have a perceived advantage over their peers. In fact, most all Cuban amateurs are purposely trained in the southpaw stance to give them an edge over their competition.

In his upcoming fight, the 29 year old Jr. middleweight will take on experienced ‘B-side’ fighter, Freddy “The Rail” Hernandez (30-2, 20KOs) at the Fantasy Springs Casino in Indio, California. Also on the card is exceptional blue-chip prospect, Gary Russell Jr. and a main event of Cornelius Bundrage-Cory Spinks for Bundrage’s IBF 154 lb. title. The bouts will be broadcast live on Showtime’s Championship Boxing series on June 30 at 9pm EST.