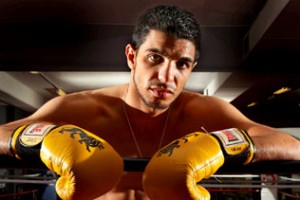 Broner (23-0, 19KOs), the WBO’s super featherweight champion is almost universally recognized for possessing an incredible skill set while also maintaining the distinction of having an equally audacious attitude both inside of the squared circle and out.

If that intriguing fight ever materializes, Dib would likely face Broner in the United States. Dib’s last match from America was in 2008, his lone defeat to southpaw Steven Luevano (he’s since rifled off 13 exciting wins with one no contest).

The entertaining 26 year old, Billy “The Kid” debuted at the lightweight limit of 135 pounds back in 2004 but has since fluctuated as high as welterweight (147) and as low as the featherweight division in which he currently resides (126). The Aussie’s upcoming match will be held at 130 pounds, the divisional limit for super featherweights (which is where Broner and his WBO title belt currently reign).

If Dib is successful at turning away the challenge of the Mexican lefty, Rodriguez in his native Australia, he will likely have to make a choice between defending his featherweight crown (and likely attempting to unify the titles at the weight) or a move up in weight to try his hand at becoming a two-time world champion.

The Boxing Tribune has Billy Dib listed as #10 at featherweight and his division is rife with potential challenges and legitimate stars including Indonesian Chris John (47-0-2, 22KOs), the exciting undefeated fringe titlist Mikey Garcia (28-0, 24KOs) and the WBO featherweight champion, Orlando Salido (38-11-2, 26KOs).

Updates are forthcoming and as always, The Boxing Tribune will have all the news at it breaks.