Wladimir Klitschko (57-3, 50 KO) has received the same compliments and the same criticisms for several years now.  Since becoming the incredibly unstoppable heavyweight champion he has been for more than five years now, supporters have applauded his utter dominance of every single challenger while critics have pointed out that he wins in a robotic manner that can be considered a cure for insomnia. 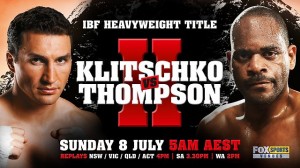 On the one hand, it is hard to dispute the positives.  The younger of the two Klitschkos is simply worlds above everyone over 200lbs (other than his brother Vitali).  Since his loss to Lamon Brewster in 2004, Klitschko has won fifteen in a row with eleven bouts ending inside the distance over that time.

Since his fight with Samuel Peter in 2005, where Klitschko had to drag himself off the canvas several times to win a decision, he has hardly lost a round.  It’s not just that he wins fights– He makes them so one-sided that the eventual outcome is often crystal clear within the first minute of the bout.  That clear cut result gets more and more painfully obvious to the opponent as time wears on.

The question becomes whether the fight gets painfully more boring to the viewer as time rolls by during a Wlad fight.

Will that be the case this weekend when Klitschko puts his titles on the line against Tony Thompson (36-2, 24 KO)?  Is this one-sided control of a fight through a long jab, straight right hand, cautious approach, and clinching tactics when an opponent gets inside, something that can draw interest from the American audience?

Before assuming this weekend will be the same old Wlad jab-jab-right-clinch fest, hold the remote.  With this particular opponent, it could be far less coma-inducing for several reasons.  That is not to say the result is in doubt or even that this will be competitive.  Klitschko already knocked out Thompson back in 2008 in eleven rounds.  Since that time, Klitschko has gotten better while Thompson has passed forty years of age.  But it just might be interesting enough for fans to take notice.

While Thompson lost the first encounter, his size and willingness to trade produced a fight far more entertaining than other Klitschko encounters over his title reign.  Thompson stands six feet five inches with the same eighty-one inch reach that Wlad possesses.  Klitschko was not able to simply keep Thompson at the edge of the jab and out of striking distance as he has been able to do with smaller opponents.  He was forced to throw far more punches than normal and to use a variety of punches, including upper cuts and left hooks to the head and body.  The champ, who rarely has a mark on him, also had to endure and fight through a bleeding left eye from a clash of heads early in the fight that is bound to happen with two large men– one orthodox and one southpaw (Thompson being the lefty).

Furthermore, Thompson has no intention of trying to play slick with the power punching champion.  He openly reported on a media call that he plans to force Wladimir to stand and fight which may not be good for his health, but will be good for viewer’s entertainment.

“Well, first of all my willingness to fight his ass.  You know a lot of people accept it but that’s not what we are coming over to do.  You know I can guarantee, a lot of people want to guarantee victory.  I can guarantee I’m gonna fight.  I’m gonna press the fight.  I’m gonna try and take the lead.  I’m not gonna sit back and let him right hand me to death.  He can change strategies and he can do a lot of things well, but again I’m gonna be the one to press the fight I’m gonna throw a lot of punches.  My willingness to fight is the biggest reason.”

Several factors outside the ring also lend to making one believe this could be a different Klitschko fight while it lasts.  Ever the professional, Klitschko is training hard and will be in top shape but he could be taking Thompson lightly.  Klitschko made it clear that he is only fighting Thompson because he is the mandatory challenger and that he would have preferred a new opponent as opposed to one he has already knocked out.

“One more thing I want to say is I didn’t choose Tony Thompson to fight.  I’m forced to fight Tony Thompson.  All the respect I want to give him he has been fighting his way back to the top to become number one mandatory in IBF and so I have to defend my IBF title.

“I’m going to be pretty honest, I would rather take some fighters I haven’t fought.  So I can pick something new but I have no choice.  I have to defend my titles.”

While Klitschko seems somewhat bothered to be facing Thompson, the challenger is hungry and motivated.  He cites an injury in the first fight for his losing performance and believes that healthy he will be a different fighter.

It’s also worth mentioning that while the champion may not be as interested in this bout, the challenger has the greatest motivation of all pushing him.  Thompson knows at his age this is his last shot.  He will come to the ring with the hunger and determination of someone who knows if he does not succeed today, there is no tomorrow.

“To me, my age is playing a big part.  As far as boxing I feel good.  I feel healthy.  My body feels good.  I haven’t been in a lot of wars.  As everybody knows I started boxing at twenty-seven.  I haven’t been beat up on.  I can hold a good conversation.  My head’s been intact.  But you know it is desperation.”

Whether Klitschko does not want to bother with Thompson because he is old news or because he represents a dangerous southpaw with equal size and reach is for the champion to answer.  The fact is that Thompson may actually present a challenge to Wladimir that fans have not seen in some time.  Klitschko’s size has allowed him to dominate smaller opponents, but Thompson can match the physical presence of the champion.

In the end Klitschko is probably too fast, too strong, and too skilled for the aging Thompson, but this could be interesting while it lasts. It just might produce the exciting heavyweight clash fans have desired for some time.