There’s a bit of spite in the air in the run-up to Saturday night’s IBF welterweight title eliminator between Britain’s Kell Brook and American Carson Jones.

Of course, spite is de rigeur these days, and if fighters can’t feel it, their promoters ensure they can manufacture it, what with television audiences and ticket-buyers eagerly watching on. 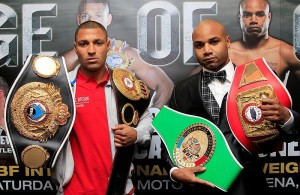 The unbeaten Brook, 27-0, 18 KO’s has found motivation in some ill-chosen words from his opponent about Sheffield, Brook’s hometown and the venue for the contest. Jones, 34-8, 24 KO’s, has wound himself up by rubbishing Brook’s record and engaging in a twitter-war of words designed to rile the Englishman.

Both fighters stand on the threshold of the big-time should they come through on Saturday night, and there’s truck-loads of money to be made in a talent-laden division featuring some of the game’s marquee names. It’s fair to say that neither Brook nor Jones have done enough yet to stand alongside the likes of Mayweather and Pacquiao, but the victor will certainly takes strides in the right direction.

Brook has done everything asked of him thus far – he was an inconsistent talent in his early years under the stewardship of Frank Warren, and suffered from periods of inactivity and out-of-the-ring issues, but since moving to Eddie Hearn’s burgeoning Matchroom stable two years ago he seems to have finally knuckled down and is making best use of his undoubted ability. Good quality wins over Lovemore N’Dou and Matthew Hatton, in which he was taken the distance but barely lost a round, have suggested that the self-styled “Special K” could be the real deal.

25 year old Jones’s record is conspicuous for the absence of recognisable names – and for some losses dotted through it against journeymen, including a two year period between 2006 – 2008 when he lost 4 out of 5 contests. A sensible examination of Jones’s career, however, shows that he turned pro at 18 and was matched tough and often early on – a fistic education that in these days of protected “O’s” is rare. The truth is that Jones is 19-1 in his last twenty, and he’s stopped 14 early. That’s some form, regardless of the quality of the opposition.

Brook will be on home soil at the Sheffield Motorpoint Arena, and he’s become something of a star in the UK since shutting out Hatton this March, so Jones’s mouth may have written a cheque he can’t cash in front of Brook’s vociferous support. Brook was disappointed with his performance in beating Hatton, saying afterwards that he was too soft on his opponent, and he promises that this time the spite is real and tangible:

“Against Matthew Hatton I used the pressure and nerves to my advantage. I coasted through the fight really, and this time I want to move through the gears and really hurt him. It’s such a high class division that you have to do something really special to get noticed – I know I have to get rid of this guy in style on Saturday night and believe me, I will. I’m going to show some nastiness in there” he said.

Jones, meanwhile, addressed Brook directly at this week’s presser, and promised him a tough night:

“You have never been in the ring with anybody as bad (he meant good, or mean, presumably) as I am. I feel sorry for you” said the American.

For all his bluff and bluster, I think Jones has a style that will suit the hugely talented Brook, and I see the 26 year old slicing through the visitor and winning inside six rounds.

Chief attraction on the undercard is the rematch between European middleweight champion Kerry Hope, 17-3, 1 KO, and the man he won the title from in March, Grzegorz Proksa.

Their fight in March resulted in one of the upsets of the year when the highly touted and unbeaten Proksa suffered a serious cut over his left eye in the second round, was thrown completely off his stride by the injury so that he tired quickly, and was out-scored over twelve rounds by Welshman Hope. Proksa had raced to 27 undefeated contests and in his previous fight had looked hugely impressive in blitzing Sebastian Sylvester in three rounds on the German’s home turf. Hope, meanwhile, had had a sketchy career with a couple of journeyman losses, and wasn’t expected to give the Polish Proksa any real trouble.

I expect a return to normalcy this time round – there was no doubt last time out that the cut made the difference in the fight, together with some complacency on the part of the Pole, and I expect Proksa to walk through Hope this time and stop him in the middle rounds to recapture his title.

The return fight between former WBA light-welter titleist Gavin Rees and Liverpool’s Derry Matthews also features. These two boxed last October for Rees’s European lightweight crown but the fight was declared a technical draw after four rounds due to an accidental clash of heads that left Matthews with a broken nose.

Matthews, 30-6-1, 16 KO’s, is one of those fighters who is blisteringly hot when he’s in the mood, but downright awful when he’s not. Back in 2008-2009 he lost four fights all by stoppage, and was deemed to be finished, but persevered through a Prizefighter appearance, and some decent wins, before coming unstuck again against Italian Emiliano Marsili in January, when he looked out of his depth dropping a seventh round TKO. Despite the setback he was granted a British title shot and was expected to be blown away by highly touted champion Anthony Crolla in April, but in the event he hit one of his purple patches and dropped Crolla twice en route to a shocking sixth round TKO.

Rees, 36-1, 17 KO’s, has become part of the furniture of British boxing, and the Welshman’s sterling record testifies to the fact that he is a top-class operator. Now down at lightweight, Rees should still figure in the world title picture, and a win over Matthews could propel him into domestic clashes with the likes of Ricky Burns and Kevin Mitchell, who announced their September world title clash this week.

Matthews is putting up his British title, Rees’s European title is on the line – but even if Matthews hits another purple patch he won’t have what it takes to unseat the excellent Rees, who could force a late stoppage if the mood takes him.