While no official announcement has come from promoter Main Events all reports are indicating that Tomasz Adamek’s opponent for September 8 will be former multi-division champ, but now long past his prime, James Toney.  Adamek has won two in a row and wants to remain active.  The bout would take place at the Prudential Center in Newark, NJ in the mid-afternoon with a majority of the revenue expected to come from PPV buys in Adamek’s homeland of Poland. 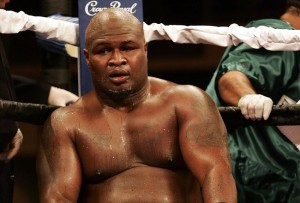 Adamek (46-2, 28 KO) is coming off a tough and disputed decision win over Eddie Chambers on June 16 on the Fight Night series.  Chambers injured his left arm in the first round which later would require surgery.  The injury caused Chambers to fight one-handed.  Adamek took advantage by being the more active fighter, which got him the rounds on the judge’s cards, but Chambers landed the harder and cleaner punches despite only having his right arm to work with.

Adamek has won titles at light heavyweight and cruiserweight.  He was stopped by Vitali Klitschko in his bid to win a heavyweight title.  Adamek’s other loss was at 175lbs. to Chad Dawson while he has wins over Paul Briggs, Steve Cunningham, and Chris Arreola along with several other notable names.

Toney has been in with a laundry list of top talent.  He was outgunned by Roy Jones Jr. back when they were in their primes, but scored wins over many top contenders.  Toney provided fans with numerous thrilling battles including his war with Vassiliy Jirov at cruiser and his stoppage of Evander Holyfield at heavyweight.

Both of those bouts were back in 2003 and he has had few highlights since that time nearly ten years ago.  He took two beatings from Samuel Peter in 2006 and 2007 and since that time his only wins have come against journeymen.  Many have begged for the once electric performer to call it a career and those chants were especially loud before and after his shutout decision loss to Denis Lebedev late last year.

Whether critics like it or not, it appears the bout will be going forward.  While Toney will certainly not bring the skills of ten years ago he brings a name to the ring and, for better or worse, boxing TV ratings rise when the opponent has a name fans recognize.  At this time no American TV coverage is set but in the past Main Events has been willing to go with Independent PPV’s in similar situations.