Kell Brook failed to take the major step towards international recognition he needed tonight when he barely outpointed American Carson Jones over twelve see-saw rounds at the Sheffield Motorpoint Arena. The unbeaten Brook, now 28-0, 18 KO’s, took charge from the opening bell, and out-classed the ever willing Jones for six rounds before succumbing to the American warrior’s non-stop aggression in the latter half of the fight, in which at times he was made to hang on as he tired badly. The suspicion was that Brook’s nose was broken in the eighth, as from then until the end of the fight he wilted badly. 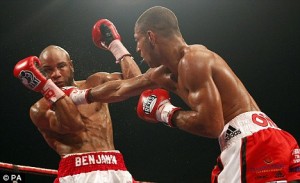 To his credit, Brook showed exceptional heart and guts to come through and take the decision, but this was no Pacquiao or Mayweather – this was Carson Jones, an earnest and hard-working fighter who resides below the level of true world class. In the first half of the fight the American was thoroughly bamboozled by Brook’s speed and slick skills, so that the Sheffield man couldn’t miss the on-coming visitor with a textbook left-right combination; in the second and fifth rounds Brook even looked a couple of punches away from stopping Jones.

Fighting on home soil, Brook’s worrying collapse after the seventh round had the Sheffield crowd screaming its support, and the tension got to Brook’s corner, where his usually placid trainer Dominick Ingle dropped all pretence of professionalism between rounds and ended up barking and shouting at his fighter and fellow corner-men, at precisely the time when Brook needed a calming influence. It was a pretty disgraceful show from a normally top-notch team.

Ingle’s antics clearly affected Brook – he rallied to take a share of the tenth, and win the eleventh round, but lost the twelfth as Jones motored forward. At the final bell the two fighters, who’d shared some bad blood pre-fight, embraced and acknowledged each others efforts.

Afterward, Brook and his promoter Eddie Hearn, hinted that their preparations for the fight hadn’t gone as expected. Said Brook:

“Carson Jones has got my respect tonight. He caught my nose in the fight and I couldn’t breathe. I think it’s broken. I was tired half way through. I think I need to look at my diet. I’ll come back badder and stronger – I proved I had the heart.”

Hearn went further: “People under-estimated Carson Jones. We’ve got to go away and re-group. We need to learn to prepare like a champion. We’ve got to do things right. He (Brook) showed heart, but he wasn’t 100% tonight.”

Jones, who’d had plenty to say in the fight’s build-up, was philosophical in defeat: “It was close and a majority decision. Maybe we can do it again”, he said.

The 26 year old Brook now stands on the threshold of the big time in a division that boasts the sports biggest names, and but after this performance his backers should not be shy in pursuing the likes of Khan, Berto and, surprise, surprise, Paulie Malignaggi and Randall Bailey, al of whom may feel capable of beating the Kell Brook we saw tonight.

In the chief support Gavin Rees confirmed his status as a world title contender down at 135 pounds when he stopped mood-fighter Derry Matthews in nine bruising rounds to retain his European title and annex Matthews’ British crown.

This was a reprise of their October 2011 encounter when they shared four intriguing rounds before an accidental head-butt broke Matthews nose and forced a no-contest. This time, Rees left no questions unanswered and took control of the fight from the fourth round on, having been speared on the end of Matthews’s long jabs in the opening three. Once he’d established control Rees made light of his lack of height and reach against the much taller Matthews, rolling under the punches and countering with short left and right hooks. Rees, of course, is an ex-light welter world champion, and he was quicker to the punch than the quirky Matthews when it mattered, the Liverpudlian simply unable to cope with Rees’s speed and punch-variety.

Matthews began to wilt from the sixth round on, and was close to being stopped in the final seconds of the eighth round when Rees caught him with a looping right and was tee-ing off on him against the ropes as the bell sounded. Surprisingly Matthews came out and showed some resistance early in the ninth, and landed a couple of decent combinations, but Rees showed his class, waited his moment, and at the mid-point of the round he chucked over a big right hand which had Matthews down and rolling over on his back. Matthews was up at eight and showed willing but referee Howard Foster had seen enough and rightly called the fight off.

Afterwards Rees was looking forward. “I had to jump in from out of distance. I think he got a bit tired and I started catching him and got him out of there. Hopefully I can now sort a world title fight out”, he said. Eddie Hearn, his promoter, agreed: “We’re going to deliver that world title shot in the new season.”

Also on the undercard Grzegorz Proksa regained the European middleweight crown he lost to Kerry Hope back in March when he knocked out Hope in the eighth round.

Proksa’s loss in March was a huge surprise, when he surrendered not only the title but also his unbeaten record, but this time there were no mistakes from the anglicised Pole. As he controlled the fight from the first bell, and might have had Hope out of the fight earlier were it not for the Welshman’s excellent chin. At times the fight was scrappy, courtesy of Proksa’s awkward, hands-down style, but the ending was emphatic – a swinging right hook which landed flush on Hope’s chin. When he rose at the count of eight, he clearly had no idea where he was, and referee John Keane rightly stopped the contest.