I went on record some time ago and said I’d be highly surprised if this fight ever actually took place. (And I desperately hoped it wouldn’t!)

Well with just 5 days to go, it looks like I may be proven wrong. 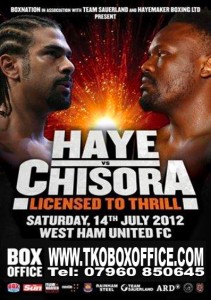 It hasn’t been a smooth ride and it hasn’t been received with universal praise and support but its very very nearly upon us. Are you excited? Thought not!

So lets look beyond the fight itself to what else has happened, might happen and probably will happen when (and if) this fight gets written down in the record books as an actual event.

Firstly, the undercard has fallen apart.

Frankie Gavin decided his boxing licence wasn’t worth risking and decided to bail out and preserve his chances of fighting for a British title. A real one. Not a WBO national belt.

Povetkin v Rahman is off too. Hasim injured his hand and the bout is off for now.

That leaves those with the misfortune to have bought a ticket and with just the main event and a couple of minor undercard fights involving Liam Walsh and Matthew Hall against fairly innocuous opposition for quite possibly the least meaningful titles this side of the UBO.

Secondly, I don’t believe it’s going to be quite the stadium sell-out that the ‘promoter’ was hoping for. You can still buy tickets in all of the price ranges right up to the ‘premier’ £1000 seats. I popped 6 in my basket without any issues.

Yeah, right…as if! And £210 worth of bank card handling fees on top! The office of fair trading would have a field day on that one!!

Boxnation are claiming there will be unprecedented demand for subscriptions. So much so that they introduced a ‘registration fee’ to try and ‘manage demand’.

What that actually means is that they don’t want everyone subscribing on the night because their payment system can’t cope with demand (with a proven track record of failures) and they need to smooth out subscriptions over time.

Doesn’t appear to have worked though and having announced the registration fee and set a deadline for avoiding that, they are now promoting an offer code to avoid the fee.

My guess is that they’ll get hit with all the demand on the night (which won’t actually be that big a demand. I reckon they will be lucky to get anywhere near 100,000 subscribers) and the payment system will crash and they’ll be forced to make a call on whether to face the wrath of people who couldn’t get through or air it free which will be financially very very bad for them.

There hasn’t really been a lot of mainstream media coverage. I recall Haye and Harrison ending up on day time terrestrial television in the run up to their little phoney war. Haven’t seen hide (not Herbie) nor hair of Haye or Chisora outside of Sky sports news and specific press events.

Sky won’t really be interested in pushing this one beyond the obligatory news slot because they have the Khan V Garcia fight on later that evening and because they are allied to Eddie Hearn and Matchroom who are Warren’s arch rivals.

Doing Warren a favour bears no fruit for them.

And no Sky support equals no punters.

So where does that leave the wonderful Mr Warren then?

Not believed to be flush with money lately and potentially facing legal action from multiple fighters seeking to free themselves of his managerial clutches, a poorly attended/subscribed event could be the final straw.

Haye will surely want paying his handsome purse and the Luxembourg Boxing Federation won’t have been playing lead pawn in the political chess match for sheer bragging rights down at the ‘fringe sporting organisations club bar’.

Wouldn’t surprise me if one or two more court cases developed out of the back of this one for non-payment of agreed sums. Police need paying, ticket agencies, fighters, venues, the list is endless….

Will the BBBoC call whoever is actually left involved in this event to account? Warren and the LBF postured themselves to a position of issuing their own actions against the Board.

I say it’s a nil sum game and they’ll just forget their differences and move on.

And how hard have Haye and Chisora trained for this one? I can see it being an ugly, slow, gasp-fest for as long as it does actually last. If it ends early that’ll only add to fan frustration.

Haye is the favourite, but Chisora is Warren’s fighter and it’s a Boxnation fight so I wouldn’t like to see it go to the cards, could get ugly there too. But there will be plenty of space around the ring for disgruntled fans to play. They’ll have 2 seats a piece.

All in all, this one will most likely result in a bad taste in the mouth, empty pockets and the sense that your £50 (or your £1000 if you literally did have more money than sense) would probably have been better used as kindling.

But there might be some wins out of the back end of this thing….

– Frank Warren might go bankrupt and be banned from being involved with the sport. Financially bankrupt of course. Moral bankruptcy came and went.

– Haye might win, get a fight against Vitali Klitshcko and get whats been promised since he limped shamefully out of the ring with Wladimir, excuses at the ready and set off to try and convince the British to buy his book and keep him in the manner to which he had become accustomed. Chisora will then probably need to put himself to work in one of his collected and restored London taxis.

– Dereck Chisora might win, get a fight against Wladimir and gets whats been coming since he spat water in Wladimirs face and generally besmirched the reputation of British sportsmen overseas. Haye will then retire again. Hopefully permanently this time.

– Fans might actually start realising that spectacles and stunts aren’t actually good for boxing or them or the young up and coming fighters and journeyman pro’s whose careers are controlled by men who want to make a fast buck just to save their own necks or indulge their penchant for Vegas champagne parties.

I live in eternal hope.