Two-time WBA super middleweight world titlist, Anthony Mundine (43-4, 25 KOs), is ridiculously pursuing a bout with Floyd Mayweather Jr. and is working toward that goal by fighting walking dead, Bronco McKart (54-9-1, 32 KOs) on a Wealth TV pay-per-view show this Saturday from the Palms Casino and Resort in Las Vegas, Nevada.

At a suggested asking price of $29.95, the question may be whether anyone will buy this card or, at the very least, whether they will break a double-digit buy rate. 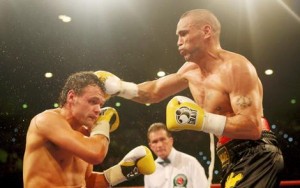 Australia’s Mundine is 7-2 in world title fights during his two title reigns and holds victories over Danny Green, Antwun Echols, and Sam Soliman. The 37-year-old now finds himself at middleweight for this bout after a fairly successful stint at junior middleweight, which saw him briefly hold an interim WBA title and notch a couple of decent wins over second-tier competition like Rigoberto Alvarez and Garth Wood (who beat Mundine in their first encounter). Three of “The Man’s” defeats have come at the hands of world titlists (Mikkel Kessler, Manny Siaca and Sven Ottke).

On the other side of the ring is Bronco McKart.

McKart beat Jose Medina via majority decision in April. It was his first bout back following a two-year retirement. For those tracking the 41-year-old’s last quality win, the quest will take you back to 2007 when McKart topped Enrique Ornelas via close, controversial split decision. Since then, the Monroe, Michigan native has retired twice and holds a record of 3-2-1. In his prime, the TV-friendly southpaw came out on the losing end against Kelly Pavlik, Winky Wright (three times), Verno Phillips, and Travis Simms while establishing his high-water win mark against the likes of Aaron Davis, Alex Bunema, and Santos Cardona. McKart also holds a 2008 draw with a faded Raul Marquez.

On the undercard, light heavyweight fringe contender, Dmitry Sukhotsky (18-1, 13 KOs) takes on Cornelius White (19-1, 16 KOs) in what could be a fairly competitive match.

For those with thirty bucks to toss around so lightly, The Boxing Tribune would like to direct your attention to out “Donation” button on this site’s right panel.

Scheduled start time for the PPV is 8PM ET/6PM PT.