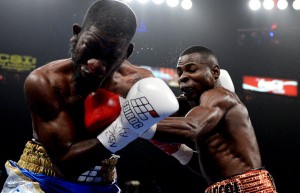 Offered up as nothing more than a polite whisper in passing, the undefeated Cuban, Guillermo Rigondeaux’s name was dropped by both Top Rank big boss, Bob Arum and by Donaire himself in a moment of fleeting interest in regards to Nonito’s future. It seems more than likely that for now, Top Ranks’ plans for the Flash will be limited to belt collecting, possible record fluffing and then the inevitable move up to the featherweight division for higher profile fights against bigger, more recognizable names.

Athletes and promoters have been choosing fights based on name recognition as opposed to actual ranking for a long time, it’s nothing new to the sport. Someone like Guillermo Rigondeaux who literally has only a handful of fans and hardly any real name ‘value’ will have an extremely hard time landing a major fight, such as a Donaire clash, due to his advanced skill level coupled with his lack of professional tenure (in the game it’s called high risk-low reward). Even with Rigondeaux’s recent contract extension with Top Rank, his immediate future seems destined to be filled with names like the Kennedys and the Marroquins of the world.

It also seems that with Bob Arum’s business model comes a sense of redundancy. A few years ago, when many fans and media outlets felt that another of his Cuban standouts (Yuriorkis Gamboa) were ready for the proverbial big leagues (Juanma Lopez), Arum graciously informed the world of his plans, stating “I know what they [fans and media] want and they can go fuck themselves.” in regards to the idea of the potential clash.

That fight never materialized, however, as a man (Orlando Salido) who was soundly defeated by the Cuban (Yuri Gamboa) went on to defeat the then recognized as the best in the division (Juanma Lopez) twice, ruining the possibility of the Cuba Vs. Puerto Rico drama that Top Rank often loves to lean on.

It remains as conjecture for now, though, as Guillermo Rigondeaux’s options are limited to who his promotional team can secure for him without risking another of their potential cash-cows. Sometimes in boxing, the meaningful fights can’t be made by simply ‘calling out’ of another fighter after an impressive victory, occasionally battles are won and lost in back-room business deals.