Vitali Klitschko (44 – 2, 40 KO) continues his dance of words with David Haye (26-2, 24 KO) after the Londoner reclaimed his position as Britain’s most credible Heavyweight threat with a 5-round drubbing of Dereck Chisora (15-3, 9 KO).

Dr Ironfist has a bout scheduled against undefeated German, Manual Charr (21 – 0, 11 KO ) later this year and it will be interesting to see whether and how the Hayemaker forces himself into that equation. 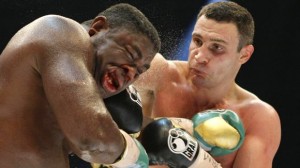 There is clearly a lot of commercial levering going on here.

Having been shown who was boss last week, rumour has it that Del Boy is now a possible foe for emerging Heavyweight prospect, David Price (13 – 0, 11 KO).

Price, the new British champion courtesy of his handling of Sam Sexton back in May, is managed by Frank Maloney but having lost out on critical Sky TV coverage looks set to sign with rival broadcaster, Boxnation, despite Maloney and the networks impresario, Frank Warren, never being the best of friends publicly.

Chisora will prove a decent test for Price and tell us whether the Liverpudlian is destined to follow in the footsteps of his managers last Heavyweight champion, Lennox Lewis.

Fresh off his one sided caning of Tony ‘The Toothless Tiger’ Thompson, the other half of the metal handed brethren, Dr SteelHammer himself, Wladimir Klitschko (58-3, 51 KO) is now surely considering his next victim and the boxing press are debating the possible names like junkies talk about grades of heroin.

Dereck Chisora has done himself no favours to be a contender for that particular ‘smoking’ when it was believed a win over Haye would put him in prime position to come face to face with the other brother and have to back up his spits with hits.

Still, stranger things have happened and Chisora could probably still beat Tony Thompson so he may yet get himself another payday…err…opportunity!

Another big’un who will be back in the frame soon and who has crossed swords with the Zimbabwean-born enigma is Robert Helenius (17-0,11KO).

Finland’s ‘Nightmare’ has been recuperating after shoulder surgery which, like Vitali’s similar recent issues, gives context to the apparent impressive performances given against both by Chisora and if Helenius can remain healthy then a match up against Wlad will be at least mildly more competitive than the latter’s last, well, 16 opponents?!

And there are plenty more in the mix in a division that for one reason or another, like all divisions in boxing that turn on a single fight, is starting to get interesting again.

Adamek has a date and a venue but no opponent. Povetkin has a belt but no real credibility after getting taken life and death by Marco Huck.

Kubrat Pulev is threatening after unhyping Alexander Dimitrenko and Britain’s Tyson Fury continues to ride along on a crest of public enthusiasm and at the same time mild bewilderment.

He has an incredibly infectious personality, humility and a genuine ability.

Not to mention huge heart.

But like a slightly lighter countryman, questions about his chin remain.

And the British mass are possibly waiting for a huge metallic hand, encased in gauze and glove to detonate upon it.

But that’s still the beauty of boxing right?

Everyone looks great. On paper.

And on canvas. Until something heavy hits their chin. Or the back of their ear.

Then its goodnight Vienna.

The heavies are getting interesting again.