Entertaining-as-hell TV staple “Hammerin’ Hank” Lundy (22-1-1, 11 KOs), who has grown up as a fighter on ESPN2 Friday Night Fights, continues his march toward a title shot at lightweight against gatekeeper Raymundo Beltran (25-6, 17 KOs), who is looking to beat a legitimate contender for the first time in his career. In the co-feature, super middleweight Farah Ennis (19-1, 12 KOs) continues his march through the mediocre, taking on Richard Pierson (11-2, 8 KOs) in a likely showcase fight. 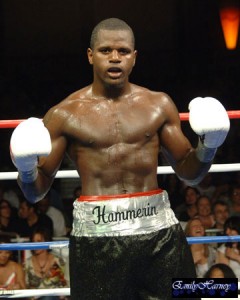 Raymundo Beltran is the kind of fighter who can make Hank Lundy look good. Every time Beltran has stepped up to B-level competition or better, he has lost, including stoppage losses to Ammeth Diaz (in 2008) and by fourth-round TKO in 2001 to a 10-12 fighter (Steve Trumble) who did not even meet that B level specified. Beltran has lost to Luis Ramos Jr and Sharif Bogere as well, and neither of those guys are as good as Hank Lundy, who could probably make a good account of himself if given a title shot at this point in his career. Raymundo Beltran is an old 31; he has been fighting since 1999 and has a lot of wear and tear on him far above his age.

Meanwhile, Hank Lundy continues to march forward after learning how to take a punch in defeat against John Molina. The crucible test came last August, when Lundy fought David Diaz in the FNF season finale. When Molina put Lundy down and tested his ability to hold on, survive, and recover, Hammerin’ Hank failed the test, leaving the referee in a position where he had to stop a fight that the Philadelphia-based fighter was ahead on the cards. When Diaz dropped Lundy in the fourth, Lundy held on, survived, spent a minute on the stool in the corner, and came out strong in the fifth, finally stopping the fight and turning David Diaz into a bloody mess in the process in the sixth round.

John Molina has shown no interest at all in a rematch with Hank Lundy. Lundy claims it’s because Molina knows that he couldn’t win that return engagement; as time goes on, Hank Lundy could force John Molina’s hand by getting his hands on a world title belt. Knocking out Raymundo Beltran on national TV in front of a friendly Atlantic City audience could do wonders toward that end.

Meanwhile, Farah Ennis continues to try to make a mark in the super middleweight division, a division that has been severely weakening post-Super Six like a hurricane that was devastating when it crashed onshore but has been over land too long. All of the major players are either moving up to 175 or else have fizzled in terms of providing superfights down the road. With the division falling from grace, it will be the prospects who step up and reload the division, and a fringe guy like Farah Ennis can start his march to a title in the new landscape Friday night.

The above is largely grasping at straws; Ennis is probably not that level of fighter. His lone pro loss was to 10-0 Alexander Johnson by a majority decision that was a gift to Ennis; Johnson was comfortably ahead on two of the three judges’ cards. Johnson has a loss to an unbeaten prospect himself, suggesting that nobody involved is championship caliber.

That said, Richard Pierson is a patsy. Pierson lost a split decision to Derrick Findley and got smacked around by 6-2-1 Don Mouton in 2008; he has no signature wins to his credit that would mitigate a loss to that level of competition. If Farah Ennis cannot beat Richard Pierson convincingly, as in by very wide unanimous decision or knockout, the super middleweight division may have to look elsewhere for its Next Big Thing.

Friday Night Fights airs July 27th at 10 PM on ESPN2 and ESPN3.com. The Boxing Tribune will have a full recap of the night’s action, including any swing fights that make air, following the conclusion of the telecast. In addition, our own Gary Purfield will be in attendance taking photographs; look for extended bonus coverage this weekend. Stay tuned—we’re the worldwide leader in covering the Worldwide Leader.

Fox Doucette covers Friday Night Fights for The Boxing Tribune. His weekly column, The Southpaw, appears on Thursdays. Fan mail, hate mail, and relief from the humid summer heat can be sent to beatcap@gmail.com.