Former world flyweight and junior bantamweight champion Vic Darchinyan (37-5-1, 27 KOs) moves away from Showtime, where he fought in their bantamweight tournament last year, to the friendly confines of HBO’s Boxing After Dark series on September 29th. He takes on undefeated prospect Luis Orlando Del Valle (16-0, 11 KOs) in what will be a truly monumental step up in class for the unbeaten fighter…and an untested step up in weight for Darchinyan. 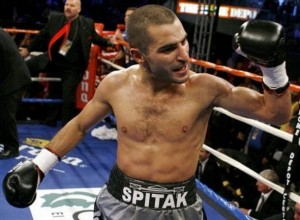 Darchinyan has held the IBF title at flyweight and the undisputed title at junior bantamweight (having unified the WBC, WBA, and IBF crowns at 115 pounds) but has so far largely turned up second best in his efforts at the 118-pound weight limit. Four of his five losses have been at bantamweight (the fifth was at flyweight against Nonito Donaire in 2007.) Indeed, Darchinyan, since moving back up to bantamweight to campaign there regularly in 2010 (he fought several fights at that weight early in his career before finding comfort further down the scale) is a very pedestrian 3-4.

It should be noted that whatever the scale says on fight night, this will be the heaviest Vic Darchinyan has been in his career. This fight will be at junior featherweight, a division in which the native of Armenia has never competed. Given his troubles at 118, one must question his power at 122.

For Del Valle, that untested nature of his opponent at the weight is going to be his biggest ally in the ring; he has otherwise fought relatively limited competition in his career so far between junior feather and featherweight. Del Valle will be the much bigger man in the ring; he has fought as high as lightweight, coming in at 133 pounds in his third pro fight. Del Valle’s most recent win came in April of this year against Christopher Martin, a fringe prospect best known to audiences for his two appearances on Friday Night Fights this year. He has, however, never fought anyone with the pedigree of a guy like Vic Darchinyan, no matter how far above his best weight that opponent may be.

The Boxing Tribune will have more coverage of this fight as fight night draws near; stay tuned.