Sakio ‘The Scorpion’ Bika (30-5-2, 21 KOs) is the latest fighter to throw his hat in the ring for the opportunity to throw the rest of himself in there when IBF Super Middleweight champion Carl ‘The Cobra’ Froch returns to action in early November. 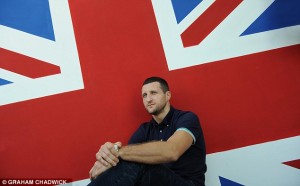 It’s pretty much confirmed that rematches against Mikkel Kessler or Lucian Bute will happen but Froch has promised fans that we won’t rest on his laurels while those fights get done and will be looking to take on a top 10 opponent in what is likely to be his 2nd consecutive fight back on home turf in the UK, most likely in his hometown of Nottingham.

But there is no shortage of willing volunteers for the blue corner on what will either be a 3rd or 10th November bout.

Kelly Pavlik (40-2, 34 KOs) has been widely talked about in the press with both Froch and Pavlik expressing a desire to get the fight on. Pavlik, the former Middleweight champion, is making decent progress on his return to the sport after battling bottled demons and moving up to the 168lb class and given his style and credentials, this would certainly be the fan friendly match up.

Another name in the frame is IBF ranked #4 South African, Thomas Oosthuizen who has also registered his desire to come to the UK and try to wrest the Cobra’s IBF charm from off his waist.

Oosthuizen (19-0-1, 13 KO’s) isn’t really proven at world level yet and already has a fight against Rowland Bryant scheduled for August which must first be negotiated. So too does the IBF #2 guy, Canadian Adonis Stevenson who is fighting Donovan George 9 days after Oosthuizen fights.

Stevenson would surely love to try and claim back some national pride for Canada on behalf of countryman and fellow super middleweight, Lucian Bute who got so dramatically dismantled by Froch just this past May.

So, a queue is forming and with no immediate fights on the horizon, Bika must surely fancy his chances at returning to the UK for the first time since dropping a UD to Joe Calzaghe back in 2006.

Pavlik must still be in pole position but if it doesn’t get made then Bika is right in the mix.

An announcement from Froch’s manager/promoter Eddie Hearn of Matchroom Boxing is expected soon.