In the course of doing research for this article, I started with the WBC’s rankings at lightweight. After all, John Molina is fighting champion Antonio DeMarco for the title on September 8th. He must be a player in the division, right? My first source showed that Molina wasn’t in the top 15. So I went to the WBC itself. Rankings were “under construction”. Stay classy, Jose Sulaiman. Finally, I looked everywhere that Google would take me—that first source (Fightnews) wasn’t a misprint. John Molina is not ranked at lightweight by the WBC. So what the hell is he fighting for a title for? 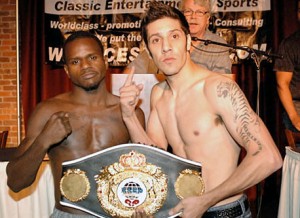 The progression seems to me to be obvious here. Boxing Tribune favorite Hammerin’ Hank Lundy will dispose of Raymundo Beltran on ESPN2 Friday night. I’ll watch, I’ll love it, the Recap will write itself (a sportswriter’s best friend is an athlete who gives him a lot to write about by being entertaining in a very distinctive way—guys like Ruslan Provodnikov and Guillermo Rigondeaux also have this talent), and Hank Lundy will remain the mandatory challenger to DeMarco’s title.

Speaking of DeMarco, he will very likely dispose of John Molina in Oakland, but what if he doesn’t? What if Molina becomes the champion in a division and under a sanctioning body where the #1 contender, although a guy that he’s beaten in the past, is a guy he’s clearly afraid to face again?

Just imagine the howling from Team Lundy and from the fighter himself, since Hammerin’ Hank has never been afraid to speak his mind, infamously calling Molina a “dumb fighter” in advance of that 11th-round TKO on ESPN2 that remains the lone loss of Lundy’s career. If the fight isn’t immediately made and purse bids put out to everyone and their sister for a January fight date for Lundy-Molina II (and wouldn’t that make an absolutely perfect season opener for Friday Night Fights in 2013? ESPN should break the bank if that opportunity falls into their lap), Lundy will start insisting that Molina is ducking him.

Of course, goad a proud man and one of two things will happen. Either he puts his money where your mouth is and agrees to that fight, making everything kosher and giving us an early frontrunner for 2013 Fight of the Year…or else Molina continues to think that he would be best served fighting someone else if he wants to retain his belt. Molina then leans on Jose Sulaiman to scour every club, back alley, and gym in Mexico to find him a challenger, and fights DeMarco again before going on to Jorge Linares, Reyes Sanchez, a way-above-his-weight Yuriorkis Gamboa (ludicrously ranked #2 by the WBC at 135), and a chihuahua, all while Hank Lundy sits and stews on his #1 ranking.

The possibility also exists that Molina could play the role of bad-faith negotiator, using his title as a club to force Lundy into fight terms that use the result of their first fight as an excuse, offering him 20% of the purse bid and putting terms and conditions into the fight like California judges and the referee from their first fight (Ricky Gonzalez, who with very good reason does most of his ref work at a dive like the Twin River Casino in Lincoln, Rhode Island, where people too cheap to pay for the extra seven bucks’ worth of gas to drive to Foxwoods go to gamble), and generally acting like (depending on your point of view as a fan) either Mayweather did toward Pacquiao or Pacquiao did toward Mayweather during their negotiations.

So Hank Lundy rejects those terms, fights on ESPN2 where he can make a steady paycheck as a main event draw, uses his platform both on the Worldwide Leader and here on the Tribune to call out Molina for not negotiating in good faith, for trying to screw him because Molina knows he’ll look like a chicken for outright rejecting the fight and so imposes absurd fight terms, and generally raising hell to the point where the boxing press notices.

Finally Team Lundy gets sick of Molina getting called the champion and finagles a fight for the vacant WBA title with Gamboa or with Richard Abril or with whoever Gilberto Sanchez says that Hank Lundy can fight, wins the WBA strap, unifies the WBO against Ricky Burns and gets “super champ” status from the WBA, and starts getting talked about as potential Ring Magazine champ (for the people in the media who still give a damn about the Ring rankings, and there are enough of them—including the guys at ESPN—that it’s worth discussing). He then calls out Molina as the only man remaining in his way in his efforts to become truly undisputed.

Molina stonewalls. He makes noise about moving up to junior welterweight or back down to junior lightweight. Finally he makes a fight with a way-past-his-prime Humberto Soto, himself a puffed-up junior lightweight fighting at 140 pounds these days and holding a couple of major world rankings, and pretty much dares Hank Lundy to follow him. The boxing media, tantalized by that otherwise-forgotten eleven rounds of television in 2010, continues to feed the beast, aided and abetted by a telegenic guy whose ability to command an interview session is matched only by his ability to use a perceived personal slight as motivation. Finally, in 2015, everyone is reminded of the immortal words of legendary poet laureate Axl Rose:

While you’re breakin’ down my back and I’ve been rackin’ out my brain
It don’t matter how we make it ’cause it always ends the same
You can push it for more mileage but your flaps are wearin’ thin
And I could sleep on it ’til mornin’ but this nightmare never ends
Don’t forget to call my lawyers with ridiculous demands
And you can take the pity so far but it’s more than I can stand
‘Cause this couchtrip’s gettin’ older, tell me how long has it been
‘Cause five years is forever and you haven’t grown up yet.

Sounds about right for boxing, doesn’t it? Let’s get Lundy-Molina II made sooner rather than later. Because the fans don’t need another five-year odyssey of ducking, excuses, and blather about how Dana White is so much better than boxing people at making the best fights.

Fox Doucette covers Friday Night Fights for The Boxing Tribune. His weekly column, The Southpaw, appears on Thursdays. He kinda wishes he had a time machine because 1991 was awesome. Fan mail, hate mail, and debates over which was the best song on the Use Your Illusion double album can be sent to beatcap@gmail.com.