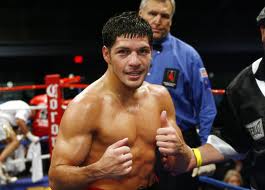 Magdaleno was in control from the get-go, pounding Davis to his 40-year old rib cage as he mixed in hard lefts and rights upstairs. Davis fought in retreat for most of the fight, and he was stunned several times as he moved away from Magdaleno.

Referee Joe Cortez mercifully called a halt to the fight at the end of the fourth round, when a two-fisted flurry from Magdaleno didn’t get any response out of Davis. The outcome of the fight was never in doubt, as Magdaleno was the bigger, stronger, faster, and younger man in the ring, and Davis was merely there to give him some rounds.

Jose Benavides also made easy work of his opponent, the untested Javier Loya. Benavides, who turned pro a little over two years ago, showed he is ready to graduate to the next level of opposition, as he showed his class over a guy a few levels below his abilities. There was nothing Benavides couldn’t do against Loya, aside from giving referee Tony Weeks a reason to allow the fight to continue past the midway point of the fourth round.

On the untelevised portion of the undercard, former Notre Dame safety Mike Lee (10-0, 6 KOs) stopped Tyler Seever (13-12-1, 1 KOs) in only two rounds of a scheduled six.