Sergio Mora fights Brian Vera this Saturday in San Antonio in a rematch nobody wanted. When the two guys first got together, back in February of last year on Friday Night Fights, they put on a show that was cure-for-insomnia stuff; thankfully your columnist wasn’t working this Tribune gig yet, because the only way I know who won is that I caught the replay on ESPN3 the morning after. Considering I was living on the West Coast at the time, that’s a hell of a boredom-induced early bedtime. 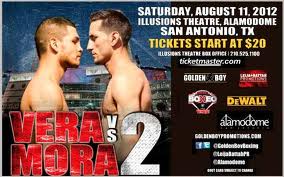 The whole thing got me thinking; why do promoters insist on putting on rehashed here-we-go-again fights if fans aren’t exactly clamoring for another go-round? Last year we got Wolak-Rodriguez I and II, a duo of fights that was very well worth the price of admission both times, and in the case of the second fight, where Pawel Wolak was rewarded for cashing out his career. Micky Ward fought Arturo Gatti three times, Jake LaMotta and Sugar Ray Robinson threw down a half dozen times, and when Mike Tyson rematched Evander Holyfield, it was billed correctly as a rematch of a Fight of the Year, impromptu Van Gogh acts notwithstanding. There are plenty of good rematches out there for the taking. Hell, our own batch of talking heads have taken on this very subject pretty much whenever there’s a slow news week around here.

So how do you explain Mora-Vera II? Brian Vera has beaten two schlubs (Eloy Suarez and Taronze Washington, combined record 25-27-1) and lost to a legit fighter (Andy Lee, by a unanimous decision that showed clearly just how overmatched Vera was.) Sergio Mora has fought only once since that fight last February, beating 45-11 journeyman Jose Flores in November. This fight has no ranking implication, no title shots, not even a lousy NABF or LMNOP belt at middleweight for the fighters’ trouble. It’s a paycheck for Vera and a shot at revenge for Mora, nothing more. Too bad the first fight sucked, therefore sucking all the motivation out of anyone’s desire to make the trip to San Antonio to witness this “spectacle” (and even Don King would hesitate to use that word here.)

This is not, of course, the worst of all possible worlds as far as rematches go. That “honor” goes to Evander Holyfield, 50, and Ray Mercer, 51, who will be throwing down in February of 2013 in a rematch of a fight they had back in 1995, a fight that was enjoyable when your columnist was in high school and the combatants were younger than I am now, but watching two guys with a combined age over the century mark attempt a sanctioned fistic contest is simply a travesty.

Besides, who pays to watch something like that? Is boxing so full of grizzled Bert Sugar wannabes that if they exhumed the corpse of Joe Frazier to let a Parkinson’s-addled Muhammad Ali beat on it like Rocky punching the side of meat, those guys would ruminate in print about the “history” between the two fighters, letting the fact that one of the guys was dead serve as only a minor impediment? If that’s excessive, what’s Trevor Berbick been up to lately? Throw him in there with Ali and let a 46-year-old Mike Tyson have at the winner. Tyson’s five years younger than Mercer, four younger than Holyfield, and younger than Bernard Hopkins, so why not?

Heavyweight seems unfortunately afflicted with rematches and rehashes. Even in the glory days, Evander Holyfield fought Mike Tyson twice, Lennox Lewis twice, John Ruiz three times, Riddick Bowe three times, Michael Moorer twice, and in his cruiserweight days double-dipped with Dwight Muhammad Qawi, as if to make a standing point for later analysis. These days the Klitschko brothers have run out of guys to fight and have therefore rematched with the likes of Sam Peter (who between the two has faced the brothers three times.) Absolutely none of those fights were in any way, shape, or form compelling.

For every Pacquiao-Marquez, there is a Klitschko-Peter. For every Ward-Gatti, a Holyfield-Mercer “exhibition” (wasn’t Balboa-Drago an “exhibition” fight as well?) For every LaMotta-Robinson, there is a Holyfield-Ruiz, although at least in the defense of those two guys, it was for the WBA heavyweight title and they did split the three fights as evenly as is possible to do so. The only problem lies in the fact that John Ruiz was quite possibly the single most boring fighter ever to lace up the gloves.

A good rematch is a pleasure. But please, promoters, managers, and sanctioning bodies, stop the insanity. When Sergio Mora is fighting Brian Vera again, something has gone horribly, horribly wrong.

Fox Doucette covers Friday Night Fights for The Boxing Tribune. His weekly column, The Southpaw, appears on Thursdays. Fan mail, hate mail, and best and worst rematches can be sent to beatcap@gmail.com.