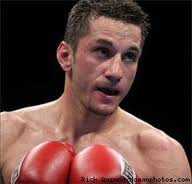 While a rematch with another Contender alumni on Telefutura may not be exactly where Sergio Mora wants to be at this point of his career, he has certainly made the most of his past opportunity on the Contender and the attention he garnered from the now cancelled reality TV show.  Many boxing fans and media at the time viewed the show as nothing more than a gimmick.  While it had some pitfalls (having fighters compete in physically taxing silly competitions in the heat the day of a fight, really) it did provide exposure and a springboard opportunity that the average unknown contender in this sport is not going to get.  Sergio Mora of all the veterans of the four seasons of the show has used that opportunity to his advantage as well as any.

Mora entered the 2004 tournament as a complete unknown to anyone outside of the hardcore boxing insider.  In his first bout he took on well-regarded Najai Turpin, one of the show’s favorites to win, and Mora used his long reach to get past the shorter Turpin.

Not missing a beat in his next bout he won a wide decision over experienced veteran Ishe Smith.  A win over Jesse Brinkley in the semi-finals and Mora got himself a date in the show’s finals with tournament favorite Peter Manfredo.  Most expected Manfredo’s power and experience to carry him, but again Mora used his boxing skills to overcome his deficiencies and took home the Contender Championship.

Since that time it can be argued Mora is the most successful of any of the show’s participants.  Despite having very little punching power and dealing with management issues that often left him on the shelf, the “Latin Snake” has made the most of what he was given.

Five months after the Contender final Mora won an immediate rematch with Manfredo, although this one was far closer and resulted in a split decision win.  Moving on from the win Mora would go 3-0-1 against good competition over the next two years.  He had one big opportunity to take on Kassim Ouma on HBO but the bout was cancelled.

Then in 2008 opportunity came a knocking for the East Los Angeles native with a bout that would change everything for him.  Picked to take on the WBC Jr. Middleweight champ Vernon Forrest on HBO, Mora had gotten his real “contender” opportunity.  Of course most believed he was nothing more than a name from a TV show put in place to keep Forrest busy.  While Mora was doing boxing’s reality TV, Forrest had been taking on the best in the business for years including being an Olympian and defeating Shane Mosley twice.  Mora though, as he has done in the past, made the most of his opportunity.

With Forrest talking tons of trash leading up to the bout and refusing to acknowledge Mora as a real test, Sergio remained quiet and ready.  When fight night came Mora was the one who was properly prepared.  He out boxed Forrest the majority of the fight winning a majority decision to become the first Contender participant to win a world title.

Mora would lose the belt to a far more focused and determined Forrest in an immediate rematch but his moment had come and he was eager to get back what he had tasted.  The problem for Mora was not in the ring though, it would be in the office.  Dealing with issues from his management which was part of the Contender series Mora found himself out of the ring for more than a year and a half.  When the contract issues were cleared Mora was being represented by Golden Boy Promotions.

He would win a comeback bout over Calvin Green in 2010 setting himself up for a PPV with future hall of famer Shane Mosley.  Unfortunately for Mora it was not one of the times in his career when he would make the most of an opportunity.  On his biggest stage he chose to play it safe not engaging Mosley and ended up going home with a draw that left a bad taste in everyone’s mouth.

Since then Mora had the setback against Vera and then a win over Jose Flores in late 2011.  Mora is a talented boxer but has average speed and zero punching power.  He carries too much weight for the 154lb division yet seems small amongst the 160lbers.  He is not a former Olympian, he is the winner of a TV reality series.  Love him or hate him for his careful boxing style and outspoken mind he has become a well-known name in the boxing world and still probably only one big win from another title shot at any given moment.

Along with K9 Bundrage he is the only Contender alum to hold a world title belt.  His reign was short but he has had plenty of other notable fights, TV appearances, and has certainly made some coin along the way.  The snake has slithered his way from reality contender to be something in the boxing world.  Boxing and being a contender is often about making the most of your chance.  Mora has done a good amount with what he was given.