Some guys have all the luck. In the case of junior middleweight fringe contender Carlos Molina (19-5-2, 6 KOs), his good fortune is finding himself elevated to main event status from the Buffalo Run Casino in Miami, Oklahoma on ESPN2’s Friday Night Fights season finale as he takes on Damian Frias (19-4-1, 10 KOs). Meanwhile, veteran Chicago-based super middleweight Donovan George (22-2-1, 19 KOs) dodges a .50 caliber bullet, as Adonis Stevenson, who might very well have killed George in the ring, had to pull out with an injury. In his stead, George gets to face Dionisio Miranda (21-7-2, 18 KOs), who has been knocked out in four of his last six fights and is coming up in weight from 160 to this super middleweight contest. 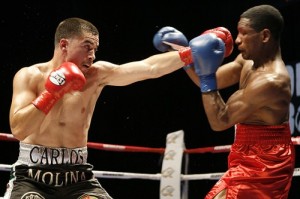 Carlos Molina has had ESPN do very well by him. In March of 2011, he was plucked from the scrap heap to provide a suitable patsy for Erislandy Lara, who at that point in his career was being pimped out hard by the Worldwide Leader as part of their showcase of Cuban fighters. Molina threw a spanner in the script, winning the fight in the eyes of the fans and earning a draw in the eyes of the judges. Either way, he was no patsy, and his reward was another ESPN2 fight in which he disposed of Allen Conyers in seven rounds outdoors in Las Vegas five weeks later.

His career charged up by those television wins, Molina first got a chance to take on Kermit Cintron, a task he handled with aplomb, winning on all three judges’ scorecards eight rounds to two. That in turn set up the James Kirkland debacle, in which Molina was disqualified when referee Jon Schorle took a moment to consult the script a la Cary Elwes in Robin Hood: Men in Tights to tell Kirkland “you get another shot!” Mind you, Kirkland hardly needed the help; he had dropped Molina, and he was well on his way to at least a majority if not a split decision, the latter due entirely to the fact that village idiot Gale Van Hoy was ringside. At any rate, Carlos Molina got the DQ loss and has spent the past five months waiting for his chance to get back on the horse.

The show pony in question is Damian Frias, a guy whose career has to this point been a case of beating up bad fighters and losing to good ones. Against fighters with at least Molina’s 73% win rate entering their fight with Frias, the 35-year-old Cuban is 2-3-1, his main virtue being that he has never been stopped. Almost all of Frias’ fights have been in Florida; the three exceptions were in Alabama, South Carolina, and the Cayman Islands, not exactly Las Vegas or Philadelphia when it comes to caliber of opposition. This whole event reeks of a club fighter thrown to a recovering contender, the same way Kendall Holt and Zab Judah have in recent years made use of the Friday night audience to put their names back out there.

Expect this one to go the distance; Molina is not a hard enough puncher nor is Frias fragile enough to turn this into a knockout situation. Furthermore, expect that for the second straight year, ESPN2 will send its weekly boxing series out not with a bang, but with a whimper; last year’s Demetrius Andrade-Grady Brewer snoozefest should give a good guideline to the viewer for what to expect here. Carlos Molina will cruise to an easy victory and get exposure in front of anyone who is either caffeinated enough or else lives far enough west to catch this before falling asleep.

The co-feature is quite a different animal. Don George should by all rights have been served up for a spectacular, brutal, “save the awards column for after the fight” KO of the Year. George had a memorable disaster in Oklahoma on FNF two years ago as Francisco Sierra beat the snot out of him and added insult to injury by delivering the coup de grace after the bell ended the seventh round. Because of the foul the fight went to a technical decision, but anyone who saw that fight knew George flat-out got his ass kicked and it was only a question of how long the demolition would go on before someone saw fit to stop it (if not referee Gary Ritter than George’s corner.) Adonis Stevenson would have murdered him; indeed, your columnist had as a draft headline “Adonis Stevenson to Murder Don George: FNF Preview” before getting the update on the bout list (a tip of the hat to ESPN’s Dan Rafael for the timely reporting.)

Instead of being a heavy underdog likely to get his brains turned into pudding in two rounds or less and join the Stevenson Victims Support Group along with Jesus Gonzales (search “Stevenson vs Gonzales” on YouTube. You’re welcome), George now becomes a heavy favorite, as the schmuck ESPN found under the nearest rock is a guy that would probably go down for the count if you gave him a hard look. Dionisio Miranda was last seen on FNF in arguably 2010’s ESPN Fight of the Year, a fight in which he was thoroughly confounding veteran middleweight Roman Karmazin before the Russian uncorked a beauty of a shot that sent Miranda down in the tenth, then dropped him again to complete the stoppage. Karmazin had been down in the ninth round of that fight and all the momentum seemed to be going Miranda’s way; speaking of “you’re welcome” YouTube fights, watch that one again before you watch Miranda in action Friday night.

Sadly for Miranda, however, dropping Karmazin in the ninth may have been the crest of the mountain for his career, leading a fight in an IBF title eliminator. It has been all downhill from there. In three fights since the Karmazin stoppage, Miranda has been knocked out twice (by Renan St. Juste in Montreal and in his last fight against Avtandil Khurtsidze in a single round in Kiev) and squeaked out a split decision win over Lajuan Simon. In total, outside of Miranda’s native Colombia he is 2-6-1 and has been knocked out five times.

As if that weren’t bad enough, Miranda started his career as a welterweight, has fought at super middleweight only once in his career (a tuneup fight in his hometown of Barranquilla, Colombia, where he came in above his usual weight for a fight against a 2-19 fighter), and will be facing a guy who has fought his entire career between 161 and 172 pounds. On top of that, Don George has eaten guys like this for lunch throughout his career, which is where his 19 knockouts in 22 pro wins come from. This is going to be nasty, brutish, and short. Check the parking lot, they’re gonna need to find two guys to come in for a swing bout.

Friday Night Fights airs on ESPN2 and ESPN3.com on August 17th, at 10 PM Eastern/7 PM Pacific. The Boxing Tribune will have a full recap of the night’s action, including any swing fights that make air, following the conclusion of the broadcast. Stay tuned—we’re the worldwide leader in covering the Worldwide Leader.

Fox Doucette covers Friday Night Fights for The Boxing Tribune. His weekly column, The Southpaw, appears on Thursdays. He thinks Don George is a tomato can until it’s definitively proven otherwise. Fan mail, hate mail, and nastygrams from idiot shills at other publications (you know who you are) can be sent to beatcap@gmail.com. All submissions via email are considered “on the record” and The Boxing Tribune reserves the right to publish all correspondence received.