Former contenders (in multiple ways) Giovanni Lorenzo (31-4, 23 KO) and Sam Soliman (41-11, 17 KO) meet in a middleweight bout this Saturday.  The bout is listed as an IBF Middleweight eliminator and will take place in Victoria, Australia.

Once considered a true contender to win a middleweight belt, the Dominican Republic Native, Lorenzo who now makes his home in New York City, has shown thus far to be just good enough to get to the dance but not quite good enough to win the big one.  He began his career with twenty three wins versus increasingly better opposition. 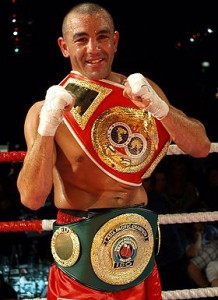 Lorenzo would hit a roadblock in fight number twenty-four, losing a razor close decision to veteran Raul Marquez in 2008.  Marquez would go on to get stopped by then-reigning and seemingly invincible IBF champ Arthur Abraham while Lorenzo went back to the drawing board with a second round knockout of Dionisio Miranda.  That bout happened to be another IBF eliminator.

This set Lorenzo up for a shot at the vacant IBF title against Sebastien Sylvester in 2009 thanks to Arthur Abraham departing to 168 for the Super Six.  Again, Lorenzo would come up just short suffering his second defeat, this time by split decision in Sylvester’s home base of Germany.

Lorenzo would again bounce back with two wins and found himself in the mix for the WBA middleweight title, but as was the case in the past, he was simply not able to take the belt.  Lorenzo would drop a wide unanimous decision to long time reigning WBA champ Felix Sturm in September 2010 and then lose another wide spread unanimous decision for the interim WBA strap to Hassan N’Dam N’Jikam.  Lorenzo has scored two quick knockouts since then and will try to continue the wins towards yet another title shot this weekend.

Sam Soliman may have never been considered an elite prospect but got his opportunity when he appeared on the third season of the boxing reality show “The Contender” back in 2007.  Soliman used the opportunity to win a few bouts along with gaining fans with his strange whirling style and happy go lucky personality he displayed on the show.

Soliman entered the tournament a well-seasoned veteran at 33-8 coming off a ninth round knockout loss to Anthony Mundine (his second loss to Mundine) for the WBA 168lb strap.  Soliman had faced tough opposition early and often in his career. He suffered losses to veteran Kevin Kelly along with being defeated by undefeated prospects Glen Kelly, Howard Eastman, and Anthony Mundine all in his first twenty fights.

Entering the tournament he recently had good wins over Enrique Ornelas, Fernando Zuniga, and Diego Castillo.  Soliman won his opening bout in the Contender with a unanimous decision over younger Max Alexander where Soliman’s experience played a big factor in the outcome.  Soliman would then be bumped from the show in a tough fought unanimous decision loss to eventual Contender champ Sakio Bika.  Soliman bounced back with a decision win over Wayne Johnson on the undercard of the show’s finale.

With his name more well-known following the show Soliman got a third crack at Mundine for the WBA 168lb belt, but again fell short, dropping a unanimous decision.  Since then, Soliman has won six in a row against varied opposition as he heads into his bout with Lorenzo this weekend.

Soliman will have the crowd and home field advantage fighting in his native Australia.  The bout should make for a decent scrap as both men have shown to be willing to put it on the line as prideful fighters.  Lorenzo brings more natural skill but Soliman will counter with wily veteran wits.  At this time no American TV has been announced for the bout.