When Lucian Bute (30-1, 24 KOs) got his brains bashed in over the course of five rounds against Carl Froch back on May 26th, most of Bute’s fans had their faith severely shaken in the true championship potential of their fighter. Your columnist is on record as being a big fan of “Le Tombeur”, using this soapbox time and again to make the case for Lucian Bute as the greatest super middleweight in the world. 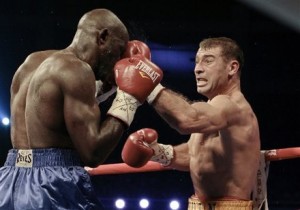 This fact was not lost on my readers and friends in and around boxing; former Boxing Tribune heavyweight guru Kelsey McCarson (now plying his trade for The Sweet Science) tweeted after the event, “@RealFoxD must look like someone told him his dog died.” Maybe it wasn’t that intense, but to be sure, I was sorely disappointed and, like so many of Bute’s fans, shaken by the vision of seeing one of my favorite fighters beaten and broken by a guy who was simply his better on that night in Nottingham.

Time flows like a river, and life goes on; Bute is getting back on the horse in Montreal on November 3rd, fighting in the friendly confines of the Bell Centre, which is as much a home to Lucian Bute’s boxing career as it is to the Montreal Canadiens. He faces Denis Grachev (12-0-1, 8 KOs), who is fresh off of a star-is-born performance against Ismayl Sillakh on Friday Night Fights that actually ranked as his third dismantling of an undefeated prospect. Grachev also brutally beat the snot out of Vladine Biosse and scored a wider-than-the-cards majority decision over Azea Augustama in 2011.

All of the above having been said, Lucian Bute is no prospect. He’s a battle-hardened former world champion, a guy who has serious designs on winning the rematch with Carl Froch in Montreal next March, a guy who has fought countless guys of Grachev’s general level of ability and tended to knock them out. Edison Miranda, Jean-Paul Mendy, Brian Magee, William Joppy…all of those guys would be considered at least on the same level as Sillakh were Grachev to fight them, and all of those guys have fallen in defeat at the fists of the Montreal-based Romanian Bute.

This has all the makings of a seemingly challenging fight. In the final analysis, however, Denis Grachev is no Carl Froch, and short of Froch (pending a rematch), nobody has been able to withstand the assault or penetrate the defenses of a guy who defended a major world title nine times before finally having the belt wrested from his grasp. Expect this one to go about five rounds before Lucian Bute imposes his will and finished what, if indeed memory serves, Ismayl Sillakh nearly started when he dropped Grachev in the third round of that FNF tilt. Lucian Bute will get back on the horse and lead a one-man cavalry charge next spring. And if your columnist is wrong? Well, making me look stupid seems to be half the job of any guy I talk up.

Fox Doucette covers Friday Night Fights for The Boxing Tribune. His weekly column, The Southpaw, appears on Thursdays. Fan mail, hate mail, and a preorder at the bakery for humble pie can be sent to beatcap@gmail.com.