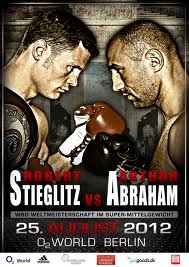 Stieglitz has held the WBO belt since August of 2009, when he knocked out Karoly Balzsay in eleven rounds. He has defended his title six straight times, mostly against club-level opposition. Two of the six defenses came against former world title challengers Enrique Ornelas and Khoren Gevor. In his last outing, Stieglitz pitched a near-shutout over Nader Hamdan.

Abraham was once highly regarded among many. His reign as IBF middleweight titlist carried little actual substance, but seven of his eleven defenses ended in knockouts and served to build the hype surrounding his title reign. Abraham moved up to the super middleweight division to compete in the Super Six Tournament and brutally dispatched of Jermain Taylor in the tournament’s opening round. In the second round, Abraham was thoroughly outboxed by Andre Dirrell before being disqualified for hitting Dirrell after he slipped to his knees. He went on to lose wide decisions to Carl Froch and Andre Ward before posting back-to-back wins against little-known opposition.