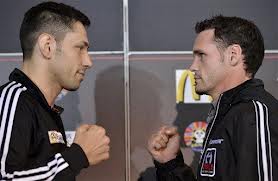 Sturm is looking to make the thirteenth successful defense of the title he won from Javier Catillejo (who took it from Sturm two fights prior) in 2007. Sturm is a top-class middleweight, but he has always caught a lot of criticism for his reluctance to leave the friendly confines of Germany and to unify his title with another middleweight titlist. To his credit, Sturm has faced credible challenges throughout his career, ranging from a debatable loss to Oscar De La Hoya in 2004, splitting two fights with Javier Castillejo, and wins over Sebastian Sylvester, Matthew Macklin, and Sebastian Zbik.

Geale lacks the elite-level experience of Sturm, but back-to-back wins over Roman Karmazin and Sebastian Sylvester (in Germany) proved he was more than an over-hyped Aussie with a world title pipe dream. After signing with promoter Gary Shaw, Geale’s exposure in the United States has increased through steady press releases and a plan to eventually make his U.S. debut. If Geale is successful on Saturday night, another unification with the winner of this weekend’s Gennady Golovkin-Grzegorz Proska fight or the September 15 Sergio Martinez-Julio Cesar Chavez Jr. title fight could be possibilities.

Saturday night’s fight could very well turn into a battle of jabs early on, as both men often work in and out behind their jabs. Sturm’s jab is regarded as the better of the two, and his April 13 dismantling of Sebastian Zbik showed a vast improvement in his application and effectiveness of his jab, as well as his overall offensive output. Sturm’s jab allowed him to dictate the pace against Zbik, never allowing him to move in close and disrupt his timing. Sturm isn’t known as a particularly hard puncher, but after a steady dose of hard jabs followed up by a workman-like straight right hand, a fighter (such as Zbik) can tend to break down in the later rounds.

Across the ring, Daniel Geale will also look to establish his jab. Geale has shown that he can quickly move in and out as he works his jab, and has the slightest advantage over Sturm in the speed department. He’s also more athletic than he’s given credit for. He’s shown an ability to slip punches and use lateral movement and angles against his opponents. He can get sloppy at times, as he tends to back straight up, but he’ll have to keep his guard up to protect himself from Sturm’s counters. Like Sturm, Geale is also not a one-punch fighter, and he relies mostly on a straight right hand both behind his jab and to counter over his opponent’s lazy jab. One clever weapon that Geale has displayed in the past has been a short uppercut on the inside, mostly thrown when he’s able to slip his opponent’s jab and counter.

Geale will shift his defensive stance often, and he’s wide open for counters. For someone with the experience of Sturm, he should be able to capitalize when Geale drops his hands in transition to his offense.

Sturm will often fight with a high guard and work his jab from the safety behind his shell. When forced to open up and exchange, his head will be there to be hit. Geale will have to disrupt Sturm’s rhythm and force him to open up, where (what I believe to be) his slightly superior speed will be an asset when they exchange.

Sturm is the far more experienced fighter between the two. His recent struggles against Matthew Macklin and Martin Murray were put behind him when he dominated Sebastian Zbik. Geale is a fighter on the rise, whose only loss came to a more experienced Anthony Mundine three years ago, and he’ll have to hope he catches Sturm on an off night to have any chances at victory. The elephant in the room in any world title fight in Germany is the house fighter coming out at the opening bell already leading on the scorecards, which will also work against Geale. Expect a strong performance from Sturm, who will outclass a game and determined Geale for a somewhat close decision victory on Saturday night (or Saturday afternoon if you’re watching in the United States).