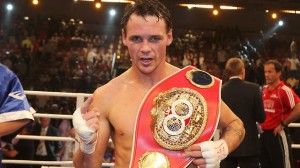 The bout was well fought by both parties and competitive throughout, with both fighters exchanging the lead on several occasions. Geale was slightly more active, but Sturm was landing the showier punches and most observers expected a close decision since neither fighter, really, took full control of the action. The unofficial scorecard of The Boxing Tribune saw the bout 115-113 for Sturm, but there were easily eight rounds that could’ve gone either way, so there was no real scoring controversy in this one.

After the bout, both fighters expressed their willingness to sign a rematch.