Technically, this was the fourth defense of Golovkin’s WBA “regular” middleweight title, but putting aside silly sanctioning body politics, this was the Kazakhstan native’s biggest fight to date against his best overall opponent– and he passed the test with flying colors. 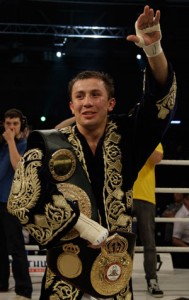 Poland’s Proksa, the European middleweight champ, was never really in the contest, offering up some relatively meaningless juking and jiving while Golovkin looked to do serious damage. A Golovkin knockdown at the end of the first round set the tone for the bout and the rest was just a matter of time as the defending champ did pretty much whatever he wanted to do from that point on.

Golovkin would score a much more solid knockdown in the fourth and then drop Proksa one more time in the fifth before the fight was waved off.

After the bout, Golovkin expressed his eagerness to fight anyone from 154-168 lbs. And while that’s the type of bravado that wins fans, it still has to be pointed out that the Olympic silver medalist and current paper WBA champ still needs a serious beefing up of his level of opposition before truly earning the rep of a middleweight elite.

In the televised opener, Serhiy Dzinziruk (37-1-1, 24 KOs) performed well in a draw with prospect, Jonathan Gonzalez (15-0-1, 13 KOs), especially considering all of the disadvantages stacked on his back. The Ukraine’s former WBO junior middleweight world champ had to deal with a 23-year-old opponent who blew past the 154 lb. limit and was fighting as a light heavyweight as well as his own 18-month stint of inactivity.

Still cool and collected and throwing one punch at a time, Dzinziruk worked steadily throughout the fight while the more fluid and, perhaps, more talented Gonzalez fought in spurts. One gets the feeling that either fighter could’ve pulled ahead if they had stepped on the gas– Dzinziruk was rusty and too cautious while Gonzalez looked to be out of shape and conscious of conserving his energy.

However, neither fighter pushed the issue. The end result was a twelve round fight full of rounds that could’ve been scored for either fighter.