Saturday Night in Newark, NJ things are getting heavy.  Main Events Promotions puts on three heavyweight bouts featuring an up and comer, an established former champ making his heavyweight debut, and another former cruiser now established above 200lb. 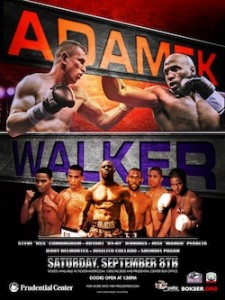 At the top of the bill is Main Events’ top draw Tomasz Adamek (46-2, 28 KO) taking on Travis Walker (39-7-1, 31 KO).  The former light heavyweight and cruiserweight champ Adamek draws large crowds to the Prudential Center where Saturday’s action takes place, drawing from the faithful Polish followers in the area.  In the co-main event former cruiserweight champ Steve Cunningham (24-4, 12 KO) follows Adamek and other cruiserweights of the past that have moved to the heavyweight division in search of bigger fights and bigger paydays.  Cunningham makes his heavyweight debut against Jason Gavern (21-10-4, 10 KO). The fast rising Bryant Jennings (14-0, 6 KO) opens the heavyweight action taking on Chris Koval (25-9, 18 KO).

The card is relying on name recognition more than matchups.  While Adamek, Cunningham, and Jennings are not in with soft touches they are heavy favorites to come out well ahead when all is said and done.  Adamek as usual is keeping busy; Cunningham is testing his mettle in the heavyweight arena, while Jennings gets a well-deserved easier foe after taking on stiff competition for such a young prospect this early in his career.

The pull of the card is the feeling that all three of the key names could be players in the heavyweight division today, tomorrow, and in the future.  Adamek could be past his best days but is certainly still a strong force and has a solid chance against anyone not named Klitschko.  He can boast of good wins against Chris Arreola and Eddie Chambers even with the latter being controversial.  His iron chin, fighting spirit, and underrated skills make him a fan favorite, especially to the Polish faithful that will pack the Prudential Center to sing, cheer, and have a merry good time showing national pride.

Cunningham brings an intriguing dynamic as this will be the first indicator of how he will do in the big man’s division.  While Gavern will not be a test with skill, whether Cunningham has the skill to compete is not the question.  No one doubts the talented boxer has the ability to compete in this division despite being undersized.  The question is if he has the chin to handle the power of heavyweights.  Cunningham has been dropped before, including in his last two fights against Yoan Pablo Hernandez and several times in his fight with Adamek several years ago.  To his credit he has always gotten up and fought like a warrior after being dropped.  Of course. when dropped by a heavyweight often heart is not the question.  When the lights go out heart tends to be irrelevant.  While Cunningham should outbox his foe all night, the moment for fans will be the first time he really gets tagged to see how he reacts.

Finally, the fast moving Jennings gets to work on his skills against the softest competition he has seen in several fights.  While his last three fights have all been good tests on Fight Night cards Jennings is still a relative newcomer to the sport and can use this fight as a chance to work on improving his overall game.  In the three big wins including his domination of former Champ Sergei Liakhovich, Jennings looked good but also showed several areas that indicated room for improvement.  The stay busy fight should give him and well respected trainer Fred Jenkins a chance to iron out the kinks before the next big challenge.

While the three big names on the card are in separate bouts, it is hard to imagine how their paths won’t cross sooner or later.  They are in the same geographic area, in the same division, and have the same promoter or promoters friendly with each other in Main Events for Adamek and Cunningham and Russell Peltz promoting Jennings.  Cunningham and Adamek fought a barn burner at cruiserweight several years ago and it only makes sense for a rematch at heavyweight.  It makes for a good fight that will sell tickets and draw TV money while keeping both busy while the Klitschko’s continue to reign.  Meanwhile, Jennings waits in the wings and would certainly jump at the chance to take on the winner.

The card is a rare afternoon event with the undercard beginning at 2pm and the televised portion scheduled to start at 3pm which includes all three heavyweight bouts.  The card is set to be a big draw in Poland on PPV which was the reason for the afternoon start time to accommodate Polish TV.  As for American TV, the three heavyweight bouts will be shown on Wealth TV.  If you are one of the few that have Wealth TV, enjoy.  Otherwise, stop back after the fights as the Boxing Tribune will be live ringside to provide a full report afterwards.