It’s  been widely reported by various sites that Julio Cesar Chavez Jr’s weight has been “on target” for this Saturday’s WBC world middleweight title defense against Sergio Martinez in Las Vegas. 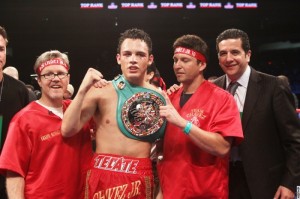 According to reports and contrary to rumors talking of weight trouble, Chavez Jr. has made WBC weight targets at both the 30-day and 7-day mandatory weigh-ins, scaling 176 and 167 lbs, respectively.

The weights, certified by a Dr. Antonio Salazar, were posted on several high-profile boxing websites and widely accepted at face value.

However, The Boxing Tribune has learned of a possible conflict involving this information and the supervising physician.

Dr. Salazar is Chavez Jr’s personal physician and a member of the Culiacán Boxing Commission, but more problematic is the fact that he also works as chief physician for Chavez Jr.’s new promotional company, Chavez Jr. Promotions.

Salazar is also the doctor under whose supervision the fighter tested positive for the banned substance, Furosemide, in 2009. At the time, Dr. Salazar insisted that the ingestion of the diuretic/masking agent was an “accident.”

“My job, as a doctor, is to protect him” Salazar told the Mexican media. “Maybe he ingested that substance by mistake.”

It should be pointed out that Sergio Martinez’s certifying physician, Dr. Roger Anderson, is also a member of Team Martinez. However, given the past Furosemide use and the fact that much of Salazar’s livelihood is currently tied into Chavez and Chavez Jr. Promotions, the potential for abuse is much greater on the Team Chavez side of the situation.

The potential conflict of interest involved in this case makes proceedings certainly worth supervising– If not by the Nevada State Athletic Commission, then by vigilant fans and members of boxing’s Independent Media.

The Boxing Tribune will have more information when/if it becomes available.