Rumors floating around the magical Intertubes would have you believe that Manny Pacquiao (54-4-2, Give Or Take Three Or Four Gift Decisions) is going to fight Juan Manuel Marquez for a fourth time in December. Boxrec has the date as December 8 against an opponent “TBA”, Dan Rafael reports that Bob Arum told him Marquez is the opponent and the blogosphere has itself lit up with the rumor, thence to run with it. 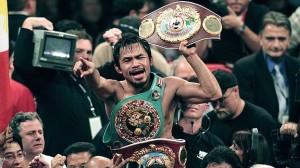 The response itself has been predictable. Pacquiao’s legion of fart-sniffers claim that Manny will win by early-round knockout because their fighter is the greatest of all time, never mind that Pacquiao has never in his life been able to handle counter punchers in general and Juan Manuel Marquez in particular. For sheer level of baffling ignorance, “did you even see the last fight, you idiot?” is as good a dismissive statement as any. Your columnist has that three-fight series scored two fights to nil for Marquez with the second throwdown ending in a draw.

Speaking of Marquez, though, it seems oddly appropriate that Manny would step in against a guy who is the difference between 54-4-2 and 52-6-2. As the old saying goes, “live by the sword, die by the sword”, and Manny’s WBO title belt went bye-bye after Pacquiao, used to getting completely undeserved raisings of his hand aided and abetted by his fairy godmother of a promoter in Bob Arum, saw that pixie dust sprinkled upon the wheelchair-bound dome of Timothy Bradley. The irony is delicious.

Long and the short of it, Pacquiao will fight Marquez, Marquez will win the fight, and that fact will have little to no bearing at all on the actual scoring when the three blind mice at ringside submit whatever scores their Top Rank overlords assigned to them before the fight. The fix is already in.

The question of Manny Pacquiao’s legacy has always centered not around his days at 130 pounds and below, where he is unquestionably an all-time great (beating Erik Morales like a piñata twice and avenging one of his three legitimate losses—Bradley notwithstanding—in the process tends to cement that).

If Pacquiao had retired in 2008 after the David Diaz fight, he’d have been a genuine champion at four different weights (fly, junior feather, junior lightweight, and lightweight, and he’d have had a fine argument for the featherweight ranks despite the draw when he fought Marquez at 126), he’d have fought a level of opposition that was beyond reproach and knocked a staggering number of those guys out (35 knockouts in his 47 wins as of the Diaz stoppage).

Except for a couple of lingering questions about his chin thanks to those two bizarre knockout losses during his Philippines club fighter flyweight days, we’d be rightly calling Manny Pacquiao a Hall of Famer and an all-time great little guy. Nothing that has happened in the last four years should take away from that.

But here’s the thing. Manny Pacquiao’s legion of fellatio administrators, his adoring fans…they constantly repeat the fiction that Pacquiao is “a world record eight-division world champion” (which he is not; for starters, Pacquiao has only captured belts in seven weight classes, and beyond that, his belt at 140 was the IBO belt, won from Ricky Hatton, that is not considered a “legitimate” world title.) Let’s leave aside the absurdity of that “record”, since great fighters of the past would have had to start their careers at flyweight, end them at heavyweight, and win a world title at every step along the way to get to eight world titles. Anyone much bigger than a strawweight when he turns pro is going to have a hell of a time even doing that much in today’s 17-division sanctioning fee jamboree. As stupid records go, that’s barely better than the Boston Red Sox crowing about their “sellout streak” even as the team sucks balls.

As a welterweight, and many people new to the sport haven’t seen Pacquiao fight below 147 (at least in theory), Pacquiao’s “championship run” has been a farce. Corpses and catchweights combine with hand-picked opponents with name recognition on the downside of their careers to produce the kind of “championship run” that nobody who knows a goddamn thing about boxing should be stupid enough to fall for. Yet there they are, the shills in the media and the frothing fanboys who act like they have a stake in the action, all of them combining in a whirlwind of utterly moronic behavior in order to advance the belief that Manny Pacquiao is a cross between Pernell Whitaker and Sugar Ray Leonard as a welterweight, something that is about as true as Paul Ryan’s assertions about the president.

Make no mistake; I think Manny Pacquiao is a Hall of Famer. But this run of idiocy ever since he moved up in weight beyond the level where he was an honest-to-gods champion just makes him look like a guy who’s more interested in cashing in (which, if reports are to be believed, he can’t even do properly because Arum and his entourage are bleeding him dry) than being the all-time great fighter he was as of the David Diaz fight.

And yet here we go again. Juan Manuel Marquez. A fourth fight nobody wanted. And people will buy the pay-per-view and act surprised when Pac wins an undeserved decision. Plus ça change…