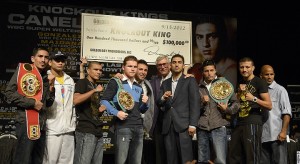 Given the fact that Lopez is a career 140-pounder (with only one fight at 147) moving up to challenge an established 154-pounder, the edge in main event allure goes to Martinez-Chavez. But this is boxing, and a Canelo Alvarez knockout isn’t set in stone.

As our very own Fox Doucette pointed out yesterday, it is Lopez’s heart, will, and determination that shattered the jaw of “Vicious” Victor Ortiz, scuttling Ortiz’s plans to be in Las Vegas trying to dethrone Alvarez on Mexican Independence weekend. It was Ortiz, not Lopez, who was supposed to be here on Saturday night. But a well-placed left hook broke Ortiz’s jaw and put him on the injured list while Lopez was given the shot at his first world title.

Alvarez has been dogged with criticism (although not as harshly as his countryman, Julio Cesar Chavez Jr.) for the quality of his opposition. That hasn’t ended with his selection of Lopez as his September 15 opponent, but it should be noted that Alvarez did try to schedule a more “worthy” jr. middleweight contender. Paul Williams was originally scheduled for September 15 before a motorcycle accident left him paralyzed from the waist down. James Kirkland was the first reliever to come out of the bullpen, but his asking price was too high and he was sent packing. After Ortiz’s injury Golden Boy had to dig deep to find, and even legitimize Lopez as Alvarez’s September 15 opponent, and after some debate, here we are.

Like Doucette stated in the provided article earlier, Alvarez is untested against a young, hungry fighter with the drive to break him. He’s never had to dig down deep and pull victory from the snarling jaws of defeat. Either Alvarez is that good or his opponents have been carefully selected. For all of his talents and abilities, my money is on the latter. Alvarez is facing a man naturally 14 pounds lighter, but coming off a career-defining victory over a huge welterweight who was heavily favored.

For Alvarez not to fall into Lopez’s trap, he must not underestimate him…in any way. Alvarez hasn’t been tested, and as shown in his fight with Alfonso Gomez, Alvarez can lose interest and test out his shoulder roll technique in the ring when it should be honed in the gym. Until he rocked Gomez and sent him stumbling across the ring, forcing the referee to stop the fight, Alvarez was in a tight fight with Gomez. Against Josesito Lopez he can’t afford such a mental letdown. What Gomez lacks in physical gifts, Lopez possesses. He’s stronger and hit harder than Gomez, and he’s just as tough and gritty, if not more so.

It’s quite possible that Alvarez has within him the heart to live up to the standards set by many great Mexican warriors that have come before him, but he hasn’t been asked to show it thus far in his career. But with a naturally smaller fighter, it might not be his undoing if he were to settle in the pocket and fight Lopez’s fight.

The real attraction in Saturday’s “Knockout Kings” card is it supporting cast made up of three quality fights that will probably serve to steal the show. WBC featherweight champion Jhonny Gonzalez (52-7, 45 KOs) defends his belt against former jr. bantamweight champion, Daniel Ponce De Leon (43-4, 35 KOs) in the co-featured bout. Both men were once thought of as finished as top fighters. After flaming out in the bantamweight division in 2007, Gonzalez was going nowhere. He lost his first super bantamweight title bid to Toshiaki Nishioka in 2009, and was the heavy underdog against Hozumi Hasegawa when he challenged for the WBC featherweight title last April. But Gonzalez turned back the clock, stopping Hasegawa in four rounds. He has since gone on to defend his title against Tomas Rojas, Rogers Mtagwa, and Elio Rojas. Gonzalez is one of the more impressive pure punchers in the lighter weight classes. He is tall for a featherweight, and his straight right hand, while not as impressive as the right hand of Randall Bailey, stands out. He also throws a murderous left hook when he sets his feet and turns into it, just ask Hasegawa.

Daniel Ponce De Leon is the clear underdog in this fight, but he has improved his stock since being blown away by Juan Manuel Lopez in one round back in 2008. The compact southpaw altered his style enough, morphing from the brave brawler into more of a tactician, however slight the improvement. He arguably beat Adrien Broner last March before being stifled in a losing effort to Yuriorkis Gamboa last September. Ponce De Leon has won two straight since the loss to Gamboa, albeit against less-than-stellar competition, and he’ll be a stiff test for Gonzalez.

Argentinean slugger Marcos Maidana (31-3, 28 KOs) and Jesus Soto Karass (26-7-3, 17 KOs) will also be in action on the undercard. Maidana isn’t known for his technical skill, rather for his Neanderthal-like offensive approach. He often completely does away with a jab (if he throws it at all) in favor of rushing in looking for a kill shot. He’s become known for a somewhat suspect chin, but also for balls the size of basketballs that allow him to get up from crushing knockdowns (see Ortiz-Maidana, 6/27/09, and Khan-Maidana, 12/11/10). He’s become a fan favorite, and despite losing two of his last four he’s still an attraction because of his style.

Soto Karass is another “all-balls” fighter who makes up for his lack of skill with aggression and an iron will. He’s been involved in entertaining scraps with Alfonso Gomez, Mike Jones (twice), and Gabe Rosado. He looks to be on the downside of his career after dropping consecutive decisions to Jones followed by a stoppage loss to Rosado, but he’ll make the fight entertaining while it lasts.

The opening bout of the night will feature young IBF bantamweight champion Leo Santa Cruz (20-0-1, 11 KOs) defending his new title against former world champion, Eric Morel (46-3, 23 KOs). Santa Cruz impressed in his TV debut back in June, when he pitched  a shutout over Vusi Malinga on the Tarver-Kayode undercard. Santa Cruz threw over 90 punches per round, smothering the South African and imposing his will on a man eight years his senior. Santa Cruz doesn’t have standout one-punch power, rather it is his volume punching that carries him to victory.

Morel is at or near the end of the road. While he has only lost three times in his career, his speed and skill have eroded to the point where his effectiveness has dipped and he’s a more hittable target in the ring. Morel lost nearly every round to Abner Mares in April, and his decline was apparent. An upset is unlikely, but he won’t go down without a fight against Santa Cruz.

Boxing fans are indeed faced with a tough decision on Saturday night. Hell, even we, the standoffish members of the independent media will be forced to choose between the stacked undercard (not to forget the Alvarez-Lopez main event) of Golden Boy and Showtime’s “Knockout Kings”, or the marquee headliner of Top Rank and HBO Pay-Per-View’s Martinez-Chavez Jr. middleweight title fight. DVR’s, don’t fail us now.