Ricky Burns confirmed his class and enhanced his international reputation on Saturday night when he stopped Englishman Kevin Mitchell in the fourth round to hang on to his WBO lightweight title.

You know it’s a big fight in the UK when Michael Buffer is drafted in to do the announcing, and the occasion didn’t disappoint, with ten thousand well-fuelled folk crammed into the Scottish Exhibition Centre in Glasgow. Pre-fight there were a few skirmishes up in the bleachers, de rigeur in a highly charged Glasgow fight arena, and the action between the ropes followed suit. 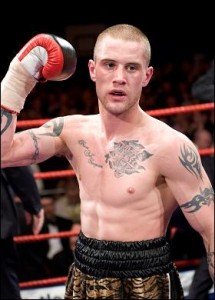 The early finish hardly told the story of a wonderful fight that started fast, with both boxers throwing caution to the wind but with the Scotsman generally having the last word in the early exchanges.

It was Burns’s greater strength that saw him through after Mitchell had started the fight more evenly, drawing the Scottish champion on to his jab and delivering sharp hooks behind it, but each time Mitchell landed Burns, 35-2, 10 KO’s, whipped over a right hand that invariably landed. The Londoner began to struggle as the contest moved into the third round, as Burns began to bully him against the ropes and rake him with combinations. Mitchell, 33-3, 24 KO’s, came out of one exchange and beat his chest in a call to arms, but it was evident that he was being out-muscled by a bigger, stronger opponent.

Despite Burns’s superiority there was little to suggest that he had the power to end Mitchell’s challenge early, but midway through the fourth that all changed, as Mitchell emerged from a clinch with his hands low and the Scottish champion whipped over a neat left hook which dropped Mitchell on his back. The Englishman showed his experience by rising to his haunches, and, despite being clearly badly hurt, taking the eight count. He rose and referee Terry O’Connor took a close look at him and waved the fight on. Burns, however, would not be denied and pounced quickly on his wounded foe, battering him with three successive right hands and dropping him again. This time Mitchell sprang ill-advisedly to his feet, and O’Connor gave him a long, hard look before letting Burns at him again. This time Burns’ attack was less precise but nonetheless effective, and after a series of unanswered punches O’Connor finally called the fight off with just a few seconds left in the round.

It was an irrepressible performance from Burns. The two fighters had trumpeted their friendship before the contest, and post-fight there was plenty of sporting embraces between them and their backers, and Mitchell was typically magnanimous in defeat.

‘He’s not a two-weight champion without having a punch’, he said. ‘He felt really fit and strong. I’ve never been stopped like that. He was awesome tonight – he pulled it out of the bag’.

Frank Warren, who promotes both fighters, was suitably pleased with his Scottish champion: ‘It was really hotting up and then Ricky showed why he’s the most improved fighter in the country. Ricky did the business on the night. Kevin needs to get himself back in the gym and can come again’.