Main Events hosted its Fight Night series in front of a capacity crowd at the Sands Casino in Bethlehem Friday with three televised bouts Friday night on NBC Sports.  The series is fast becoming something boxing fans can turn to for competitive fights in front of raucous crowds. Fans in the arena and on TV received an upset, a vicious knockout, and a big performance from an emerging contender.  Despite the original main event of Gabriel Campillo vs. Sergei Kovalev being cancelled due to a Campillo injury, the show delivered its promise of exciting competitive bouts. 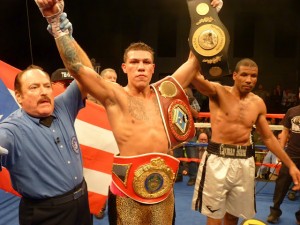 In the main event Gabriel Rosado, who has become a fixture on the Fight Night cards, took on veteran Charles Whitaker in a twelve round 154lb bout.  The winner would become the mandatory challenger to IBF champ Cornelius Bundrage.

Rosado has come up the hard way learning on the job and suffering losses along the way, but recent dominant knockout performances on Fight Night cards over Jesus Soto-Karass and Sechew Powell have shown he has evolved into a true contender.  Tonight was no different for the blue collar Philly fighter.

After feeling out his opponent in round one Rosado went to work.  His recent success has largely been attributed to his settling into a comfort zone of being an aggressive pressure fighter looking to land heavy handed blows while simultaneously employing a slick defense.  Through four rounds Rosado had control of the action but couldn’t land a big bomb thanks to the veteran craftiness of Whitaker.  Then late in round five he found the mark dropping his opponent with an overhand right.

Rosado continued his control by dominating round six and then dropping Whitaker again in round seven with a right hook.  By this point it seemed only a matter of time before Rosado finished the show.  After two rounds of slowing down the pace Rosado found his mark again in the tenth.  First he dropped Whitaker with a huge right hand.  When the action resumed Rosado would land a series of shots dropping Whitaker into the ropes and then onto the canvas.  Referee Steve Smoger didn’t bother with a count and called a halt to the bout at 1:50 of round ten.

Afterwards Whitaker (36-13-2, 21 KO) who fought well but was overmatched announced he probably would retire at this point.  Whitaker had looked at this as his biggest opportunity but simply was overmatched by his young and hungry opponent.

Rosado (21-5, 13 KO) has now stopped three in a row, five of his last six, and has not lost in more than two years.  A fighter once considered a decent club fighter has now become a legitimate contender to anyone with a title at 154lbs.  With the win Rosado becomes the mandatory IBF challenger but made it clear he wants Canelo Alvarez.  Stating he has respect for Alvarez afterwards Rosado went on to say it is time for the WBC champ Canelo to stop fighting Jr. Lightweights and step up.

Rosado’s performances have had an electricity to them.  He has the look and swagger of a confident fighter that knows exactly what he can do in the ring.  He and trainer Billy Briscoe have molded the fighter who got a late start in boxing into an all-around slick pressure fighter.  Despite the five losses Rosado has earned a shot at the top names in the division.  He wins fights and he wins the crowd with his fancy movement and willingness to engage in back and forth action.  Rosado, who traveled only an hour north from Philly to Bethlehem for the bout won over the Bethlehem fans and will make a case to a national audience if given the chance.

In the middle TV fight Sergei Kovalev who was scheduled for the original main event made short work of his replacement opponent Lionell Thompson in a light heavyweight bout scheduled for ten rounds.  Kovalev appeared at least one division larger than Thompson.  The size and skill gap was apparent from the opening round.

Kovalev followed Thompson around the ring looking to land his shots while Thompson seemed content to simply avoid any engagement.  Kovalev caught his man at the end of round two landing a big right hand that sent Thompson crashing to the canvas.  Thompson got up and as the bell sounded Kovalev landed another crushing right hand that may have been after the rounds end.

Immediately in round three Kovalev landed another right hand bomb flooring Thompson and prompting referee Gary Rosato to stop the bout at 14 seconds of round three.  It was a good stoppage as things were only going to get more brutal for Thompson 12-2, 8 KO) if the mismatch was a allowed to continue.  Kovalev (19-0-1, 16 KO) appears to be a solid contender and would benefit from a shot at more capable opposition.

In the opening TV bout Bethlehem native and crowd favorite Ronald Cruz suffered his first loss against veteran spoiler Antwone Smith.  Cruz came into the bout with a minor WBC title and ranking (the title was not on the line as Smith failed to make the welterweight limit weighing 150lbs).  The fight with Smith was his biggest test so far but it was expected the hometown favorite who was responsible for drawing the large crowd would come through successful.  The up and down Smith had a different agenda.

From the opening bell Smith established himself as the better all-around boxer.  He snapped the jab consistently keeping Cruz at bay and then fired three and four punch combinations that found their mark.  Cruz attempted to apply pressure but Smith always seemed one step ahead countering his rush and evading any danger along the ropes.

In the middle rounds fighting a scorecard deficit but being willed on by the vocal crowd Cruz began to find his range.  When Cruz got to the inside he was able push Smith to the ropes and work the body which has been Cruz’s trademark.  While Cruz was successful in spurts, every time he seemed to be taking momentum of the bout Smith would get on his toes, battle back, and regain control.

The back and forth momentum swings continued through the ten round affair with Cruz getting closer and closer to his mark, but every time he picked up steam Smith would find that range to outbox his less experienced undefeated opponent.  Going into the final round it seemed Cruz probably needed a knockout to win.  He pressed for it late in the round, had Smith hurt at times, but never able to really get him into serious trouble.

When it was said and done the outsider from Miami FL, Smith walked out with a split decision. Two judges saw it 96-94 for Smith with one judge giving it to Cruz 96-94.  The Boxing Tribune saw it 96-94 for Smith.  Smith (22-4-1, 12 KO) gets himself a win and possibly back into contention for one last title push.  Cruz (17-1, 12 KO) takes his first loss and will likely head back to the drawing board to fix some mistakes and build on what is still considerable talent and potential.

Allentown’s Jerome Rodriguez (1-1) boxed well to win a shutout unanimous decision over Kwayme Hill (1-10, 1 KO) in a four round Jr. Welterweight match by scores of 40-36 on all cards.