Welcome to the maiden voyage of the Sunday Brunch. Here we will take a brief look at some of the more notable stories swirling around the boxing landscape in a fun, easy to swallow dinosaur shaped news and opinion piece.

Julio “The Son Of Sr.” Chavez Jr. tested positive for another banned substance (this time it was marijuana), following his 11 round trouncing at the hands of the true middleweight champion, Sergio “Maravilla” Martinez last Saturday.

As The Boxing Tribune’s bomb throwing fearless leader pointed out HERE, sometimes, even the powers that be can’t control ALL the news surrounding a prized cash cow. Is anyone surprised that when Julio was made to go in front of a commission that (at least isn’t totally corrupt) actually does some kind of testing (now, do they test for weed, coke and 80’s Ivan Drago steroids or the modern stuff like EPO and the like?), that he gets popped for using something…Whatever it happened to be? I’m not. What actually surprises me is that someone let the story slip into the media’s mostly well-oiled hands. And to that anonymous individual I say thank you for doing your job.

As we all know by now, Ricky “The Hitman” Hatton is making a comeback to the squared circle after a lengthy self imposed retirement replete with gluttony, cocaine use and girl problems. In 2009, Hatton met with Filipino firebrand, Manny Pacquiao and was dually separated from his senses in two fast-paced rounds (highlights from Pacquiao fans’ perspective can be found HERE).

According to Boxrec and various other sources, Hatton is set to square off with 32 year old Aussie, Michael Katsidis in November at the Manchester Arena in the United Kingdom. Let me be the first to say that back when Ricky was undefeated and regularly in the limelight, he was one of the more affable personalities within the sport. However, after his exciting loss to the best fighter in the world, Floyd Mayweather, Hatton looked far less like his old self and more like a fighter who was one check-hook away from flying face first into another ring post (See the: Juan Lazcano “come back” fight for details).

Floyd Mayweather and Curtis “50 Cent” supposedly have “beef” now. The same 50 Cent that Floyd commented (on 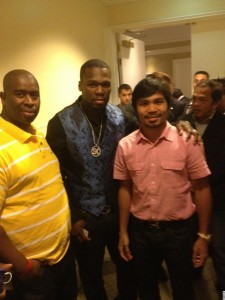 24/7) that he’d go to war with. The same 50 Cent that has been by the undefeated boxers’ side for years and was one of the few people in the world that Mayweather wanted to see and talk to after his recent, two month incarceration at the Clark County Detention Center in Las Vegas, Nevada.

Far be it from me to disagree with the majority of boxing writers and media members when I say this but…The Floyd Mayweather/50 Cent drama is FAKE MEAT. In my estimation it is an elaborate ruse to get Pacquiao in the ring with Floyd and away from Big Bob Arum. Mr. Jackson went on multiple radio shows to (promote) talk about his falling out with Floyd? Who does that? Someone who is trying their hand at media misdirection, that’s who. It’s an old boxing promoter trick and I do believe that since it’s not coming from a promoter per say, it is working like a charm.