Manny Pacquiao and Floyd Mayweather may not be any closer to meeting in the ring, but there’s at least one less obstacle standing in the way of everyone’s favorite fictitious showdown.

Today, it was announced that the feuding cash cows had reached a confidential agreement in their defamation case. 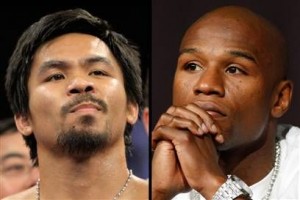 Pacquiao filed the lawsuit in December of 2009, claiming that Mayweather, as well as Mayweather’s father, Floyd Sr., defamed him by implying that he used performance enhancing drugs. A separate lawsuit, making the same claim, was also filed against Golden Boy’s Oscar De la Hoya and Richard Schaefer. The Golden Boy suit was later settled under unspecified terms.

The Mayweather decision to settle out of court comes shortly after a judge ordered the fighter to pay Pacquiao about $114,000 in legal fees for a series of missed court dates.

Speculation abounds that the settlement in some way means that Pacquiao-Mayweather will finally get made in 2013, but there’s no real indication that either side is any closer to putting their name on a fight contract.

Pacquiao recently told ESPN that he’d be willing to take the short end of a 55-45 split in order to make the bout, but the statement is reminiscent of a similar offer the fighter made earlier this year in a Pacquiao-called press conference. The offer to take the smaller share was later met with an insistence on a 50-50 split when exploratory phone calls were made to talk about actually putting the fight together.

It was reported that Pacquiao manager, Michael Koncz, was qualifying his fighter’s comment earlier this week and saying that Pacquiao meant to say 55-45, with the winner getting the larger share. However, Koncz is now saying that the 55-45 split is a legitimate, unqualified offer.

It should also be noted that Mayweather-Pacquiao talk always get dusted off and shoved into the headlines whenever either fighter wants a cheap rush of publicity for an upcoming non-mega-fight.

With both fighters nearing the end of their careers and starting to run dry on big-ticket opposition, many do feel that the two pound for pound stars will eventually find a way to scoop up the massive cash involved in, likely, the biggest money fight of all-time. But, until both names are on an actual contract, all Mayweather-Pacquiao talk is pure conjecture and fantasy.