The Ghost of Hasim Rahman made his (hopefully) final appearance within the confines of a professional boxing ring this past Saturday against the undefeated Russian, Alexander Povetkin. Let’s just say at age 39, The Rock hasn’t aged as gracefully as some other fighters have. A painful loss was imminent and it was blatantly obvious from Rahman’s abysmal physical conditioning that he wouldn’t last the duration of the 12 scheduled rounds.

The American’s poor fitness was showcased as early as his ring walk (which was oddly sans musique) where he narrowly escaped defeat at the hands of the 4 stairs leading to the ring. Seriously, “The Rock” looked like the shambling living dead out there. His wildly out of shape torso appeared to be held up by two completely unexercised toothpick legs…He was the boxing equivalent of two chop sticks holding up a turkey wearing Grant™ gloves. OK, moving on…Wait, while I’m on the subject, Alexander Povetkin is the heavyweight version of Saul Alvarez. Can these guys get some legit challenges or what? I digress (for now).

As is being reported by various outlets, Victor Ortiz is supposedly going to be training under the expert tutelage of one Floyd Mayweather Sr. (as did another fighter in this weeks’ Sunday Brunch). I believe Floyd’s brother, Roger “The Black Momba” Mayweather said it best in his response earlier this week…”Who gives a fuck?…Victor Ortiz ain’t shit anyways”. Funny stuff as usual, but come on, Rog, Ortiz is always in entertaining scraps, win, lose or KO. 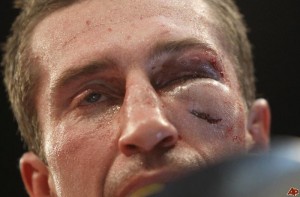 with. The previously proposed opponent, Michael Katsidis, was apparently either just a rumor or a test to see how the public responded. Either way, Hatton’s next fight is going to be against the once beaten Ukrainian, Vyacheslav Senchenko.

I understand Hatton’s logic, too. Put him in there with someone who was stopped by a fighter he stopped. A beats B, and B beat C so naturally, A beats C, right? Things doesn’t always work out like that, though. Not for nothing but Paulie Malgnaggi has an excellent jab (as highlighted by Senchenko’s face after his TKO loss to the Brooklynite this past April), and while Ricky has a sneaky quick jab (fast enough to surprise the athletically gifted Mayweather, and almost enough to score a flash knockdown…Back in 2007…), it has rarely been used effectively in his fights other than to set up his smothering offense.

All this careful planning and opponent selection is ultimately a set up to get a belt back around the waist of the Mancunian. I can imagine as a boxer that you wouldn’t want to call it a career with your last fight being a knockout (of the year), you would want to at least try to go out in a respectable fashion.

It seems obvious to me that Ricky will avoid all the big players in this, his second tour of duty, and focus on the second tier title/rankings place holders. Unfortunately for Ricky, though, it seems his eventual goal is a rematch with The Magic Man…And while The Hitman had his well-documented struggles with vice outside of the ring, Paulie was diligently training, staying in shape and fighting. Their second meeting could be drastically different than the first, stay tuned fight fans.