Featherweight contender Orlando Cruz (18-2-1, 9 KOs) has revealed to the world that he is homosexual. The response from the boxing media has been muted thus far, limited to speculation (will he get ducked by opponents or given an unmerited title shot for a feel-good story or even a setup?) and cheap but funny gags (the Tribune’s own Tim Harrison posting on Facebook that the two guys who have knocked Cruz out might face charges for hate crimes). It is probably a sign of the advancement of civilization in general that this isn’t a bigger story than it is; this is the first time in the sport’s history that a fighter with championship aspirations has come out of the closet while still active in the ring (Emile Griffith came out after he retired.) 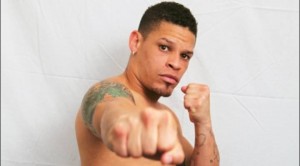 First and most obviously, Orlando Cruz just made his life a lot more difficult. He’s already shown a suspect chin, getting the snot beaten out of him by Daniel Ponce de Leon and Cornelius Lock. There is a grain of truth in Tim’s joke above; boxing is a sport where masculinity is everything. Even the women’s game features a decided manliness about it, and that’s not a joke about the women’s looks but rather a commentary on their attitudes—typical male traits of aggression and dominance are necessary to survive in the fight game regardless of the gender of the participants.

Nobody is going to want to lose to the gay guy.

In a sport where motivation is often the wellspring from which great performances are born, a trainer shouting at his fighter “don’t lose to that faggot in the other corner! Are you not a man?” will cause those guys to dig deeper—especially on the Puerto Rican/South Florida club circuit, where machismo is as common as fake tits and good food. Cruz is going to face the best version of every one of his opponents from here out as they fight to avoid humiliation in the eyes of their macho friends.

Furthermore, maybe boxing is, intrinsically, a hate crime. Someone might genuinely hate gays and relish the opportunity to legally and socially acceptably beat the shit out of one, even getting paid for the chance. Violence against homosexuals infects all walks of life, so why would it not put a little extra kick behind the punches in a violent game? Sure, if Cruz learns how to counter punch, that could get him a few wins against that style, but Cruz is Puerto Rican; “Puerto Rican fighter” and “countering style” are a contradiction in terms.

At least this isn’t mixed martial arts. A gay guy in boxing is still keeping everything above the waist with fisticuffs. An MMA fighter getting his jollies off of ground and pound would really be a trip. So far, “winning by submission” has been a pleasantly straightforward way to describe exercising dominance over one’s opponent and forcing the opponent to tap out.

A gay MMA fighter could play the heel quite effectively (and yes, there are “heels” in real combat sports, as Floyd Mayweather seems hell-bent on proving in boxing—and which the Klitschko brothers, Ivan Drago stand-ins both, have become unintentionally). All it would take would be superior position in the ground game and the ability to play on an opponent’s irrational fears or secret desires (after all, the old saw about “the ones who hate most are the ones with something they’re hiding from themselves” applies here) and boom, a guy taps out rather than face those mental demons introduced into the proceedings by his opponent.

Hell, why not play up the gay angle? Pink robes, an affected lisp in interviews, going to Pride wearing just the boxing trunks (because why not show off the beefcake for other gay dudes?) Muhammad Ali liked to call himself “The People’s Champion”, but who better in today’s world to capture a new demographic for the sport than an openly gay fighter cultivating an openly gay audience? He could fight in New York and enjoy the restaurant scene while he’s there.

Or life will go on as normal. The fact that Orlando Cruz is gay will come up in those insipid pre-fight human interest stories, they might show Cruz’s male partner sitting ringside the way they presently show a fighter’s wife or girlfriend if she’s sufficiently attractive to potentially get confused for a ring card girl, and the narrative will otherwise be “can this guy fight or not?”

So far, Orlando Cruz hasn’t proven he can fight. Daniel Ponce de Leon made him look like a boy in with a man, and Cornelius Lock did the same. The WBO has him ranked fourth, but that’s mostly due to the fool’s gold belt of the “Latino champion” that Cruz has captured (well, he’s got the interim version. Yes, there’s an interim version.) If Cruz steps up and gets clobbered again, he’s going to have much bigger questions about his boxing career than what flavor of chromosomes are in the DNA of the people he has sex with.

Either way, it’s a good sign for society. In another place and time, this would’ve been a needlessly bigger story.