Sunday night from the Veteran Boxing Association in the Port Richmond section of Philadelphia www.phillyboxinghistory.com hosted the fifth annual Briscoe Awards honoring Philly’s finest fighters and fights of 2011.  The award which is named after the beloved Philly middleweight Benny Briscoe is meant to honor the spirit of the Philly fighter along with those who stood out each year as the finest in Philly’s long tradition of great boxing.  The event is free to anyone who wants to attend with a generous helping of free food for all involved.

Along with the awards presentation the event provides a unique experience for fans, promoters, media, and fighters to all talk and mingle in a comfortable environment as equals.  Fighters of today and the past talk with everyone involved as the true gentlemen that make one proud to be a boxing fan.  Whether it is posing for photos or just talking while eating a hoagie, fighters stood side by side with fans in a way that you simply don’t see in any other sport.

Topping the list was Danny Garcia (24-0, 15 KO) as he took home Philly Fighter of the Year for 2011.  Garcia made an even bigger name for himself in 2012 by winning his first title defeating legend Eric Morales and scoring a huge knockout of Amir Khan in his first defense.  Garcia set the stage for 2012 by putting himself in line for a title in 2011.  He scored three wins including victories over veterans Nate Campbell and Kendall Holt positioning himself for the title shot in 2012.

Garcia has clearly hit the big stage currently standing at the top of the Jr. Welterweight division, but much to the delight of the packed VBA he has not forgotten where he came from.  Garcia was proud to take home the award for Philly Fighter of the Year and talked with pride about being a true Philly Fighter.

Garcia took home the 2011 award and is already the frontrunner to repeat in 2012.  His title win over Morales and thrilling KO of Khan will make it very tough for anyone to top him when the voting rolls around next year.  Garcia though is not done as he will rematch Morales who exercised his rematch clause and the two will meet on October 20 in the new Barclays Center in Brooklyn, NY.  Garcia hopes to get closer to home in 2013 by defending his titles inside the city limits of Philadelphia.

“It’s all about putting Philly back on the map.  We have a lot of great fighters and what I’m trying to do; I’m trying to open the door.  Me and my dad, you know my dad he’s the voice of me.  He speaks everything I feel.  I just want to give Philadelphia another great world championship fight and that’s my goal to bring a big fight in 2013 to Philadelphia.  Have all the great Philadelphia under card fighters on here who deserve to shine.”

“That’s my plan.  To give Philly, we have the best, best, I’ve been to a lot of places in my life and I go to the local shows and nothing compares to what we got.  We got so much talent.  We got so much toughness.  That’s why this is what promoters say; hey this kids from Philly, you want to fight this Goldenboy fighter?  They say no, we ain’t fighting no Philadelphia fighter, they too tough.  They run from us though and my job right here as being the young champion from Philly is open up the door for these guys who deserve a shot.  In 2013 I promise I will bring something big to Philly.”

Fortunately for the Briscoe Award two little known fighters put on a thrilling replacement main event on July 29, 2011 to capture the award.  Prospect Juan Rodriguez Jr. (10-0, 4 KO) from North Jersey and tough hard luck Philly club fighter Greg Hackett (2-9) were scheduled for a six round undercard bout at the Arena.  When two separate main events fell apart the week of the fight Rodriguez-Hackett was elevated to the main event.  The two fighters with less than twenty pro fights between them at the time did not disappoint in a six round thriller.

They went back and forth in a wild affair ending with Rodriguez winning a close decision.  For their efforts they were awarded with the honor of Fight of the Year in Philly and take home a Briscoe statue.

Hackett, who has been a hard working tough luck Philly club fighter, summed up what this moment meant to him.

“Being a Philly fighter for me.  I’ve been boxing for fourteen years and to be honest I haven’t won anything big that I wanted to win.  Not because I never worked hard enough but situations in my life it’s the way that it went.  For me to win this and just the Benny Briscoe award, I wish I could have met Benny.  This is a big thing like you said this is going to go down in history.  I mean all the other stuff I could have won this is got to be the best because my hometown.  Like you said it couldn’t have happened because there was supposed to be two ten rounders’ before me and they had to pull out with a six round main event. And we had to fill it, me and Juan we stepped up.”

In addition to the two main awards, when merited a special award is added.  In 2010 Dhafir Smith took home upset of

the year when he defeated former champ Jeff Lacy.  This year rising cruiserweight Garrett Wilson (13-5-1, 7 KO) was awarded the Knockout of the Year for his sensational one punch knockout of Chuck Mussachio on November 19, 2011.

Wilson had risen from defeats early in his career to begin establishing himself as a real contender in the cruiserweight division.  He was ranked by several sanctioning bodies, had the USBA cruiser title, and was fighting for the vacant NABF belt.  He had plenty riding on the Mussachio fight but found himself getting out boxed by the taller rangy fighter.  Entering the twelfth and final round Wilson was down on the cards and needed something dramatic to keep hold of his belt, his ranking, and his career.  He delivered with an overhand right from hell that connected perfectly on his opponents jaw.  Mussachio hit the canvas and had no shot to get up.  In the blink of an eye Wilson erased the previous eleven rounds and in doing so scored a Briscoe award for KO of the Year.

Wilson has made it clear over the years he has a desire to win a world title but also truly wanted to add a Briscoe award to his trophy case.  Wilson embodies the tough blue collar Philly fighter and considered it a true honor to receive the award named after Benny Briscoe.

“I just want to thank everyone for coming out to support this event, thank John Disanto for giving me an opportunity win this award.  Just pleased, extremely pleased to finally win one.  I was here when Steve (Cunningham) won two.  I’m extremely pleased to just have one of my own.  I want to thank everyone that is involved including John Disanto, Greg Hackett, Juan Rodriguez, Danny Garcia, Jeff Chandler.  Thank you everybody.”

Finally, in maybe the most impressive display of the night was a full room exhibit of legendary Philly Fighter and former World Bantamweight champion Jeff Chandler.  Chandler is an icon in Philly boxing.  Those who were around to witness his career often speak of him as their favorite Philly fighter for his toughness and exciting fights.  Those too young to have seen him live scramble for video to see the fuss the legend created and never feel disappointed when they learn what made Chandler the Philly legend he has become.

Many of Chandler’s robes, belts, gloves, and paintings of the former champ were on display along with a cartoon drawing of Chandler done by former Champ and Philly fighter Steve Cunningham who is beginning a side career drawing and writing comic books.  Chandler was on hand and the always gracious former champ talked with fans, posed for countless pictures, and showed he still has the moves putting on shadowboxing displays for everyone’s enjoyment.  In addition the WBA sanctioned an honorary belt and picked up the cost of famous belt designer Sartonk Boxing Belts to make the belt for the former champ.

To see over four hundred photos of every aspect of the night visit the link below. 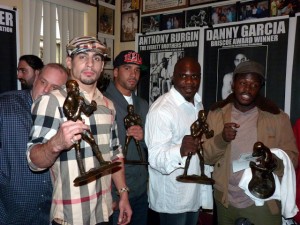