Nothing is more devastating to a fighter than to be cleanly knocked out, especially on television. 1.3 million viewers watch Friday Night Fights on ESPN2 every week. When a guy gets knocked senseless in front of that kind of an audience while Joe Tessitore and Teddy Atlas debate whether the fighter will ever be the same again, it tends to stick in the minds of fans. 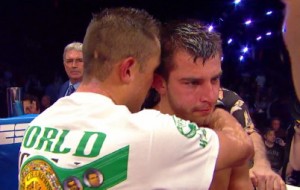 Writing the preview articles here on the Tribune this week for the Don George-Adonis Stevenson and David Lemieux-some tomato can (Alvaro Gaona) fights, I didn’t have to do much in the way of research on anyone but Gaona. George’s loss to Francisco Sierra is seared into memory for how brutal his beating absorbed that night was, and Lemieux’s memorable fall from grace against Marco Antonio Rubio (besides inspiring my debut piece for this site) was similarly unforgettable in its enduring mental imagery.

By the same token, the beating Adonis Stevenson handed out to Jesus Gonzales, a guy I’d seen fight before (interestingly, also against Francisco Sierra on FNF), left an image in my mind that has probably led me to overrate Stevenson’s power. Much like Nonito Donaire getting a reputation beyond his actual abilities thanks to the left hook he uncorked against Fernando Montiel, or similar accolades bestowed by your columnist on Lucian Bute before the Carl Froch fight, the knockout can be the most powerful psychological tool in a perception of a fighter.

Nothing makes a man look stronger than using his fists to leave another man unconscious, and nothing makes a man look weaker than lying folded in half from a body shot or supine from the force of a straight right hand crashing into his skull and scrambling his brain. Especially if the buildup to the knockout has been slow and consistent rather than lightning-fast, a man who looks psychologically as well as physically beaten can never really be taken seriously as a fighter; boxing is the kind of sport where dominance—caveman, base, primal, monkey dominance—is everything. The oldest sport in which primates (us or the apes) have ever engaged has been combat.

Don George getting crushed by Francisco Sierra endures. Mark Jason Melligen getting sadistically beaten by Sebastian Lujan was my pick for Knockout of the Year precisely because Lujan spent nine rounds doing what he could probably have accomplished in five had he not been gripped by a seeming possession of his spirit to inflict the most sadistic, emotionally violent demolition of Melligen’s psyche as the Queensberry Rules allow.

We remember the greatness of those kinds of knockouts. We remember Muhammad Ali carrying Ernie Terrell the distance just so he could spend 15 rounds beating up Terrell’s soul, not satisfied with beating the man’s body alone. We remember Mike Tyson’s seemingly desperate “why won’t you fall down?” efforts against Buster Douglas before the latter finally closed the show in Round 10 in 1990.

What’s more, not all knockouts are created equal. When Lucian Bute got well and truly demolished by Carl Froch, you’d think everyone collectively forgot he’d just spent the previous five years defending a portion of the super middleweight title against some very good fighters (sure, the best 168-pounders were fighting in Super Six or otherwise competing for belts other than the Romanian’s, but those weren’t Deontay Wilder or Demetrius Andrade’s opponents in there against Bute.) When Hank Lundy had a plausible argument that the ref stopped the fight too soon in a fight he was winning on the scorecards against John Molina, that was a motivator, not a de-motivator. Ditto any fighter who has ever said “Damn ref didn’t give me a chance to recover in there, I want a rematch, I’ll tear my opponent’s head off this time.”

Finding a fighter who can be devastatingly, decisively knocked out and come back to true greatness is needle in a haystack stuff. All the comebacks to a title for knockout victims have been either the “it was early in my career” variety (Manny Pacquiao getting KO’d twice, both times at flyweight, and both times in Thailand, well out of the world limelight or even the ESPN-level limelight), the “stupid ref” variety, or the “I just got caught” one-punch variety. The future never augurs well for the guys who have been broken down in front of national and worldwide television audiences; once that happens, something changes in a fighter’s mind and he is truly never the same.

For Don George and David Lemieux, that kind of history means we can probably write them off as fighters. George’s beating was possibly the most psychologically damaging knockout in boxing in 2010; Lemieux, were it not for the Lujan-Melligen fight later in the year, could well have taken that honor in 2011. History’s not on your side, guys. Have fun on the club circuit.

Fox Doucette covers Friday Night Fights for the Boxing Tribune. His weekly column, The Southpaw, appears on Thursdays. Fan mail, hate mail, and arguments about the severity of any given KO in boxing history can be sent to beatcap@gmail.com.