There are so many ways to write a fight review, so many cliches and buzz phrases that can be used. But when David Price (now 14-0 12 KOs) ended Audley ‘Audrey, Fraudley, A Farce, A Force’ Harrison’s career inside 2 minutes of the first round by punching him all of twice and knocking the one-time darling of British boxing out cold I did wonder how the hell I was gonna get something down that merited a read from a fight that was so utterly nondescript. 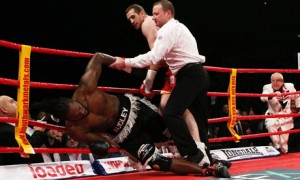 Then a good friend of mine suggested I simply do it using my tweets from during the ‘event’ – a novel idea I thought.

Lets give it a try.

“Audley is in last chance saloon? Of course – he is the Bartender/proprietor!! ”

“Audley coming out to the Rocky theme is like Kim Dong Il giving a speech to the sound of telly tubbies theme tune. its just not right”

“Audley has the eye of the tiger…..one of those cute fluffy ones that u get in the gift shop at the end of the zoo”

“…and fighting out of the ‘ brown shorts’ corner……Audley Harrison!”

“price gets through with jab…OMFG!!! its about to end!!!”

“Audley will be back in action in Redemption 2013 against Mike Holden in May people. Tune in for the next instalment!”

So there you have it!

It was a crisp straight left that set it up, sending Audley back against the ropes. Price leapt forward and delivered a right snapping right hook behind Audley’s high guard and sent Britain’s biggest boxing joke crashing to the floor.

It took some moments to bring him back around. There were concerns for his safety being uttered by the more caring spectators while the majority of Liverpool’s Echo Arena roundly booed the weak performance.

A shame for Price in the end. A great opportunity to showcase his abilities and perhaps even test his beard which came to nothing and Price’s diminutive manager, Frank Maloney, confirmed that Price will next be out on the 8th December against former European champion and one time world title challenger, 45 year old Matt Skelton.

Owning a famous Lonsdale belt (3 defences of the British title earn the fighter a permanent version of the belt to keep) seems Price’s priority right now. Tyson Fury is the fight all British fans want to see Price in.

Frank Maloney offered Fury £500,000 to make the fight live on air and Fury retorted from ringside at the James DeGale fight with a load of verbal abuse, including offering to fight Light Heavyweight contender Tony Bellew in between rounds and referring to Price and Bellew as ‘gay lovers’.

Fury is a colourful character for sure and there is a heavy rivalry between the two fighters respective home cities (borne principally of the soccer terraces) but I fancy Price to destroy Fury in the first half of the fight.

Price has dynamite in his fists and Fury doesn’t have the most solid of defences.

Britain’s next heavyweight champion will come from Liverpool, not Manchester.

It seemed as though Frank Maloney had got the fight card back to front because immediately preceding the 1 round joke bout, Jon-Lewis Dickinson (12-2, 3 KOs) took the vacant British Cruiseweight belt in an ugly 12 round snoozefest against Shane McPhilbin (8-4, 5 KOs) and just prior to that, in what should have been the main event, rising flyweight talent and Commonwealth champion Kevin Satchell (9-0, 2 KOs) defeated British belt holder Chris Edwards (17-15-4, 4 KOs) in 6 rounds with a vicious body assault finally doing the damage. Satchell is one to keep an eye on in the 112lb division.

Last words really should go to Audley Harrison, who now brings the curtain down on a 28-fight career which has seen 6 losses including 3 knockouts all to domestic rivals.

And those words are…..

“Make mine a Sarsaparilla please bartender, and leave the bottle”