If you want to open up the sport of boxing and look at its beating heart, the local fight cards are where you want to be. Away from the glitz and glitter and pouting prima donna superstars, there’s an entire population of earnest, honest fighters who have yet to make a name for themselves or earn enough money to “make it rain” at nightclubs. 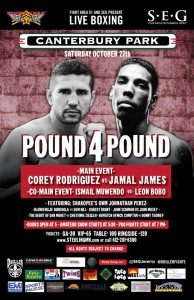 The local shows are the lifeblood of boxing and the farm system for it’s next generation. For the most part, nobody involved is making any real money– not the fighters, not the promoters or managers. They’re just doing it for the love of the game and with the hope of someday parlaying these rough learning experiences into something much bigger.

This Saturday at Canterbury Park in Shakopee, MN, one such card is taking place. None of the names would be recognized outside of the close-knit Minnesota fight scene, but if experience counts for anything, this local card, broadcast live via internet stream on sterlingmn.com, will give fight fans as much action, pound for pound, as any major, big ticket pay-per-view card.

In the main event, Jamal James (7-0, 5 KOs) will face Corey Rodriguez (6-2-2, 3 KOs) in what amounts to a Minneapolis neighborhood turf war. Both junior middleweights are local fighters with solid amateur careers. A win could mean a move away from the local club scene and one step closer to the main stage. A loss, especially for the 33-year-old Rodriguez, could make for a major career setback. James, 24, looks to be the smoother, better-skilled of the two, but at this level, surprises are commonplace and anything can happen.

In the co-feature, Uganda-born Minneapolis resident, Ismail Muwendo (10-0, 8 KOs) takes on veteran journeyman, Leon Bobo (18-9-1, 2 KOs) in an 8-round regional featherweight title bout. Muwendo appears to be one of those rare heavy-handed featherweights, but he has also been matched very lightly. Bobo, on the other hand, has seen the much better competition (Monty Meza Clay, Casey Ramos, Luis Cruz, Jorge Lacierva), but has lost to them all.

For information on purchasing tickets or for more details on the rest of the card, visit Sterlingmn.com or facebook.com/sterlingmn. Also, check out The Boxing Tribune’s TV Fight Schedule on the main page for start time info.