The number one ranked super featherweight in the world, Adrien Broner, has extremely high hopes for himself. Backed by his entourage, team and promoters along with big boss-man, Al Haymon, Broner is being dubbed by some fans and media members as the next Floyd Mayweather. 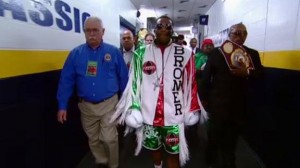 What I think is: The unbeaten 23 year old still has miles to go before he’s mentioned in the same sentence with the consensus pound for pound champion. Broner does, however, possess some outstanding athletic attributes. Pair that with his work ethic, ties to Haymon and he, his team, and his personal mobile grooming assistant may just have a recipe for success.

On November 17th, “The Problem” takes a necessary step in evolution when he faces the number 3 lightweight in the world, Antonio DeMarco for the WBC lightweight strap.

While I do like the match-up, I’m still eager to see Broner in with fighters who are more on his level…Yes, DeMarco is a definite step up over some of Adrien’s previous competition but I don’t think he will have any answers for the problems that Broner will present.

As long as Broner can stay clear of DeMarco’s razor-elbows he will win and maybe even look extraordinary in doing so.

Adrien Broner has improved since he struggled with Daniel Ponce De Leon back in March of last year; I’m just wondering is it too much to ask of the young dynamo to continue to rise in weight?

Sure, Broner can stay in the lightweight division after he’s beaten DeMarco…There’s some good match-ups to be had there, Hammerin’ Hank Lundy comes to mind.

However, I feel that the fights that will help to define Broner’s career will be at junior welterweight. Brawls with the likes of Zab Judah, Juan Manuel Marquez, Kahn, Garcia could be barn-burners. Beyond that, the uber-stacked welterweight division awaits.

Robert “The Ghost” Guerrero finally got a big fight.

Unfortunately for him, it’s against Andre Berto.

What I think is: After getting popped for trace amounts of a banned substance almost one year ago, Berto will be looking to make a big-time statement.

Having had little experience in against a hungry fighter with the attributes that the Winter Haven, Florida resident has, Robert Guerrero may just find himself victim of a savage beat-down at the hands of the former welterweight champion.

Miguel Cotto will have too many tricks up his veteran sleeves when he meets with Austin “No Doubt” Trout in December. Trout’s youth will present some obstacles early for the former three division world champion, however, look for Cotto to be supremely confident and stop the young American sometime in the middle rounds.

Brandon Rios and Ruslan Provodnikov will have a fight-of-the-year type scrap (yes I called it).

Manny Pacquiao and Juan Manuel Marquez are at it again, this time it’s 4 real.

* * *
Hey, where the hell is Joshua Clottey, anyway? Still spending that Pacquiao bonus I presume?