At the York Hall in Bethnal Green this coming Thursday evening, Frankie Gavin will challenge Junior Witter for his British Welterweight title in an intriguing match up that will reveal whether Witter has anything left in the locker and whether Gavin can live up to his amateur world champion pedigree. 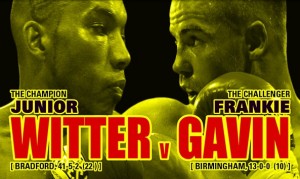 Gavin (13-0, 10 KOs) turned pro in 2009 after controversially failing to make weight for the British boxing squad that went to the Beijing Olympics. He quickly racked up a series of wins that seemed to bear testimony the fact that he could potentially be one of Britains biggest talents in the pro game.

Sadly, Gavin had a nickname that seemed to say more about his work ethic and commitment to his profession than was probably intended and after edging a close one against Curtis Woodhouse in July 2011, citing ‘personal family problems,’ ‘Funtime’ Frankie pulled out of his next defence of the WBO intercontinental title on the night before the fight, leaving his promoter and manager, Frank Warren seething.

Whatever the reasons, Gavin has begun to reapply himself in 2012 and now faces an old dog who is looking to unleash a few new tricks of his own.

Junior Witter (41-5-2, 22 KOs) has been to the top and back. Once a genuinely feared junior welterweight, Witter claimed the WBC title from DeMarcus Corley in 2006, making two defences before surrendering it in a split decision loss to Tim Bradley in 2008. However, he never managed to secure the fight he always wanted against another quite well-known British light welterweight world champion– Ricky Hatton.

After losing to Bradley, Witter tried to regain the title that Bradley had ditched, facing another world class 140lb’er, Devon Alexander but a hand injury cut short the challenge and Witter took an 18-month hiatus before losing his comeback fight and then the final of the Prizefighter series in one of the ugliest 3-round affairs in recent memory.

But it was in May of this year that Witter turned back the clock and re-enacted a chapter in his career from 7 years ago, taking the Lonsdale belt from Colin Lynes with a 12-round unanimous decision.

Both Witter and Gavin started out as light welters and now find themselves colliding in the 147lb division. Witter has been in with some of the best in the business while Gavin has yet to prove himself.

This could be the night when one star finally fades and a new one emerges or a tale of how career professionalism, hard work and dedication beats an erratic work ethic.

Based on what I saw of Witter in the Prize fighter tournament, I’d pick Gavin to end this early, but Witter is a wily character and could frustrate his younger, more exuberant foe.

Whether he can beat him is another matter.