It was a fight that had many reaching for their pillows…not to cover their faces from the bloody war that was unfolding, rather to get some important beauty sleep.

This author needs more than most let me tell you but the duel for the British Welterweight title between champion Junior ‘The Hitter’ Witter (now 41-6-2 with 22 KOs) and challenger Frankie Gavin (now 14-0 with 10 KOs) in which the younger fighter took the belt from his older adversary so lacked in aesthetic quality that you’d be forgiven for thinking that the bout didn’t fall directly from the top of the ugly tree and hit every damn branch on the way down! 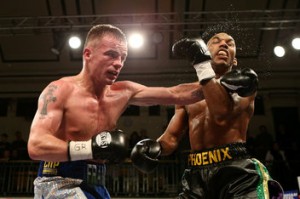 Witter has always been known for being an awkward, slippery customer and once again he talked the talk pre-fight about having power and speed but once again he failed to deliver anything resembling a performance and drew the ire of fans, his cornermen and even the referee at one stage for not trying to make a fight of it.

The highlight for me was him having his rear hand pulled forward from behind his back by the 3rd man in the ring where presumably he was ‘hiding’ it to trick Gavin (who he clearly believes to be shorter on intelligence than he himself is).

Gavin didn’t really do a lot either to be fair. Some of that can be attributed to Witter’s style for sure but nevertheless if Gavin is going to mix with the elite in the division which he believes he is capable of then he is going to have to find a way to unlock and look good against difficult opponents.

And so it ended in a clear unanimous 12 round decision with Witter docked a point in the 10th for holding. The ref should have awarded him a point at some juncture for punching. It might have motivated him.

Talking of bums. A quick word on the undercard.

A series of awful mismatches and dullfests and another phenomenon that drew cries across the social media plane from some of the purists, 2 minute rounds.

Why have 6 x 2 minute rounds? If you fighter is only good for 12 minutes, put him in a 4 rounder and stop kidding him and us!

Gavin’s next opponent and his first defence of the Lonsdale belt could well come from one of the undercard fights where Ronnie Heffron grunted and shouted his way to a unanimous decision against Peter McDonagh.

Heffron is being touted as another rising star with a Hatton like style.

Based on edging out an opponent he had beaten more comfortably 4 months prior and showing very little in the way of variation, relying too heavily on scream induced bodyshots and uppercuts I’d predict a straight forward nights work for Gavin here.

But lets remember, this is the B-side to the British welterweight scene. Kell Brook is currently the man at the top of the pile and in a months time we’ll know whether a certain Mr Hatton is back in the frame.

And of course when Mr Khan has eaten enough confidence boosting lightweights we’ll know whether he is going to settle at 140 or come and join the party at 147.

School report on Gavin – B. Competent but needs more improvement
School report on Witter – F. Faded one time star pupil. Time to leave the class and retire to the common room indefinitely. And stop taking media training from Audley Harrison!