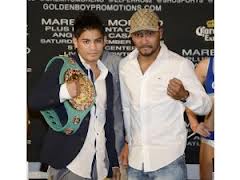 Abner Mares comes into Saturday’s fight on the heels of April’s title-winning effort against former world titlist, Eric Morel. This came after he won Showtime’s four-man bantamweight tournament and a return bout against runner up and former IBF bantamweight champion, Joseph Agbeko. Since Mares’ 2009 return from surgery to repair a detached retina, he won three straight against journeymen before embarking on an impressive four-fight streak that included a debated draw with Yhonny Perez, a win over Vic Darchinyan, and back-to-back wins over Joseph Agbeko. Mares’ first win over Agbeko was tainted when he landed several low blows without a point deduction. In the mandated immediate rematch Mares won without controversy and by wider margins on the scorecards.

Moreno has made ten consecutive successful defenses of the WBA bantamweight title he took from Volodymyr Sydorenko in May of 2008. With a title defense in his rematch with Sydorenko, two more defenses against Nehomar Cermeno, and more dominant wins over Lorenzo Parra, Vic Darchinyan, and David De La Mora, Moreno’s title reign has been impressive.

This fight is great on paper. Mares is an undefeated young champion and future star, while Moreno is the more polished, crafty boxer looking to elevate his star on the back of a victory over Golden Boy’s first homegrown world champion. But the clash of styles definitely leaves much to be desired.

Moreno has the kind of ability to make most fighters look bad. Moreno likes to use his legs to circle out of range of his opponents while his long arms allow him to score points with a good jab and a long left hand that he’ll throw to the body often. Moreno’s quickness and reflexes allow him to bend and angle away from punches, and he’s crafty enough to know when to clinch and when to slip away from danger. He’s not a boring fighter, but his style lends itself more to results than style. Despite not being known for his punching power, Moreno punches extremely well to the body. In addition to a straight left hand downstairs, Moreno is quick enough to turn over on his left hand and land to his opponent’s rib cage.

Moreno isn’t the only technically-sound boxer in the ring, however. Mares, more known for his penchant for engaging in slugging matches, is more polished than he’s given credit for. In the past, Mares had trouble with throwing his body punches from too far out, which often times caused them to stray below the belt line. His last two fights have shown that trainer Clemente Medina has done a great job of ironing out that particular wrinkle from Mares’ suit. Mares is an extremely dedicated body puncher. He digs his left hook to the body with abandon, and he’ll follow that up with a looping right hand upstairs.

Moreno will be in command of the pace of the fight on Saturday night. It is up to Mares to use angles and footwork to cut off Moreno’s path to safety when he moves out of range of Mares’ attack. Moreno will pop his jab as he moves, only setting his feet long enough to flurry. Mares, who will abandon his jab too often, will need to use that weapon to disrupt Moreno’s rhythm before he sets up to let his hands go, and his right hand needs to be tightened up ever so slightly in order to keep Moreno honest.

The edge in overall experience is debatable in this fight. Mares’ recent run of opposition sticks in the minds of boxing observers, but Moreno’s overall resume holds up well in comparison. The steady improvement of Abner Mares has been a joy to watch, but Saturday night he will come up against the style that he won’t be able to overcome. Look for a split decision victory for Anselmo Moreno, probably in the neighborhood of 115-113 on two of the judges’ scorecards.