As I’ve long maintained, Deontay “The Bronze Bomber” Wilder is the future undisputed heavyweight champion of the world. It came as no surprise to me when I read about Wilder being utilized as a sparring partner for one Wladimir Klitchko ahead of his fight with Mariusz Wach. What’s that old saying about keeping your enemies close? 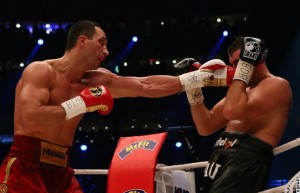 The Bronze Bomber not only holds slight height and reach advantages over the Ukrainian Goliath but he also possess some qualities that most of Wlad’s recent opponents were severely lacking.

Specifically, Wilder’s dangerous combination punching along with his youth, speed and crunching power would put him at an advantageous position should he ever have the opportunity to face one of the brothers K.

That is of course, if either of the reigning heavyweight world champions ever choose to oppose someone with a pulse…

Not that the granite chinned Pole, Wach was completely useless in there. I mean, he did have that occasional pushing jab to let the pro-Klitchko crowd know he was still alive. To his credit, Wach actually did an excellent job of blocking Wladimir’s standard one-two punch combination with his gigantic cranium.

Speaking about future champions, Gary Russell  will be the future king of the featherweight division.

Sometimes likened to former champion Antonio Margarito, Alfredo “El Perro” Angulo registered an impressive first round victory over journeyman Raul Casarez on Saturday night…While there still may be lingering questions regarding Angulo’s stamina issues, what we do know is that he shares Margarito’s passion for cornrows.

Where the hell is Tavoris Cloud? Before the Campillo heist I figured Cloud for the next major player in the light heavyweight division, however, his next fight is against Karo Murat (Murat at least got a legitimate win and a draw against the Spaniard, Campillo)…in Venezuela of all places. I guess the nine months since his last fight hasn’t been long enough to erase the stench of that Don King sponsored robbery in the minds of some. More time on the shelf it is.

Good win for Mares. I’d still pick Nonito to trounce him, though. Donaire seems to be more focused in the pocket and Mares maybe still has some maturing left to do before he refines that semi-wild but effective winging style he has.

Oh, and Nonito versus Arce? Really? Does boxing really need to see this fight? Will this win be crucial for the resume of Donaire? Travieso will be out-skilled, undersized and over matched.