In an interview (reported via Eastside Boxing), Vanes Martirosyan, recently removed from his draw against Erislandy Lara in a WBC junior middleweight title eliminator, said “My cut is healing well, but my balls are extremely sore!”, referring to a particularly blatant (in the mind of Martirosyan at least) low blow. 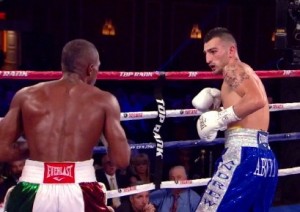 For all of the testicles’ vaunted association with pure manliness (“testicular fortitude”, “he’s got brass balls to do that”, and AC/DC’s legendary “She’s Got Balls”), the balls are real pussies when compared to…well, to the pussy. Consider what the humble vagina is asked to do with something the size of a (newborn) human head. Now consider men giving birth under any circumstances. For pure badassery, it’s better to be a pussy than to have big balls.

The tactical advantage of the low blow in a fight is tremendous. Get into a position of close infighting and use your free hand opposite the referee’s view to go to town on what ESPN’s Rich Eisen once called “the forbidden speedbag” (on SportsCenter after Andrew Golota’s second fight with Riddick Bowe). If the ref can’t see it, he can’t call it. If the so-called “protector” offers much protection, then why does every male boxer go down like he’s been shot after a clean low blow has been landed? Teddy Atlas often remarks that the cup is steel covered by hardened leather. Fat lot of good that does a guy’s delicate manly bits when the Andrew Golotas of the world dish out Nut-Punch-a-Palooza on guys like Riddick Bowe.

Not only that, but how often do low blows—the kind of punches that can completely change the complexion of a fight with their lasting effect, like a body blow turned up to 11, as any guy who’s ever been punched in the nuts and felt the dull ache for hours afterward can attest—actually cost someone a fight? Sure, if you’re Golota and the three-knockdown rule must be explained to you as not applying to dropping your opponent with blatant smash-and-grab heists of the family jewels, you’re going to get your dumb ass DQ’d, but Erislandy Lara suffered no ill effect on the scorecards for doing to Martirosyan what a squirrel does to a particularly stubborn Brazil nut.

The Armenian himself, in that same Eastside report, even downplayed fighters who show signs of having been affected by the foul play. Said Martirosyan: “Professional fighters don’t make excuses. When he gave me the intentional low blow, you didn’t see me grab my balls and immediately start rolling around on the ground in a poor attempt to get Lara disqualified.” If Vanes had flopped like a soccer player and insisted on the full five minutes’ recovery time awarded to a fighter who is the victim of a foul, perhaps the fight would have gone differently, and the referee’s perception of Lara’s tactics would have subtly shifted to watching for foul play with a mind toward issuing a point deduction—which, had the fight still ended on that accidental headbutt cut in the ninth, would have tipped the scale to Martirosyan and set up a title fight with Saul Alvarez. Vanes Martirosyan had every reason to flop like an NBA player.

Indeed, fighters have been the lucky beneficiaries of a referee’s itchy trigger finger before. On one of his more disgraceful performances as a referee in an illustrious career in a state (Nevada) where the connections afforded by his last name are of more value than his merits as a boxing man, Vic “Count” Drakulich singlehandedly ruined a good scrap on ESPN2’s Friday Night Fights show in the summer of 2011.

In that fight, Miranda landed a low blow after the bell, the kind of punch that should have merited a verbal warning. Instead, Drakulich deducted a point, and Joe Tessitore, calling the fight for the Worldwide Leader, argued correctly that the vampirically-named third man in the ring had painted himself into a corner. From that point onward, further fouls—indeed, any punch that strayed low even in the normal course of action—would have to be called with the same severity as the punch that had touched off the initial admonition and alteration to the scorecards.

As it turned out, Miranda was disqualified in the fifth round. When the opportunity came to fight Miranda again in 2012, Despaigne flat chickened out. There is no nice way to say that. Rather than face an opponent who is infamous for turning up his game when enraged by a perceived slight, rather than fight a guy who actually fights like the Incredible Hulk rather than just looking like him (Despaigne himself having been described by Teddy Atlas as “he may look like Hercules but he doesn’t fight like Hercules”), the Cuban, knowing he’d get his no-talent overrated non-prospect ass knocked into next week, simply ducked the fight. (Indeed, Despaigne has not been seen in a professional ring since losing a six-round decision to Cornelius White in his next and last bout last December.)

But what of Abner Mares? Mares, after all, has set the world on fire, beating the snot out of Anselmo Moreno just last week (sure, James Jen-Kin’s 120-106 score was more than excessive, but Mares clearly and decisively won the fight.) Had he not gone to the window, to the walls, with fists to Joseph Agbeko’s balls, Mares might never have launched his career in the first place. Having a referee who is as blind to fouls (Russell Mora) as Drakulich was oversensitive to them worked in Mares’ favor and helped solidify an emergent legend’s rise.

The moral of the story? Don’t be obvious to the point of fetishistic in punching your opponent in the dick, because it’s going to tarnish your legacy (Golota). Don’t stray low when your referee is an overweening twit with an authority problem (Miranda). Do stray low when your referee is an accessory to negligent manslaughter waiting to happen (Mora, who’s only a step or two away at this point from becoming the execrable Arthur Mercante Jr. in his ability to ignore when a fighter’s getting the worst of something.) And if you’re the guy getting your sperm’s genes re-sequenced by some other dude’s fists? Grit your teeth and take it (Martirosyan)…or flop like a fish and force the action, pissing off your opponent like poking a bear with a stick (Despaigne, who hammed up the slight that caused that point deduction in the first place.)

Or just fight clean and keep things above the belt. If all else fails? Well, we’ve learned a steel protector isn’t enough. If you’re not keen on impregnating women, try depleted uranium.

Fox Doucette covers Friday Night Fights for The Boxing Tribune. His weekly column, The Southpaw, appears on Thursdays. He’s been punched in the nuts before, and doesn’t wonder why he’s got no kids. (It’s because no woman in her right mind will fuck him, but he says it’s the punches.) Fan mail, hate mail, and women not in their right minds can be sent to beatcap@gmail.com.