Fighting on Ricky Hatton’s undercard at the MEN Arena, Manchester, this saturday night, Martin Murray has an opportunity to pick up an interim world title and push himself into contention for another crack at the full title.

A year ago, almost to the day, Murray (24-0-1, 10 KOs) followed fellow Briton, Matt Macklin, into Felix Sturm’s German den and very nearly came away with the full title, earning a draw. While this scribe saw Murray getting edged by Sturm 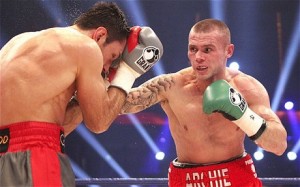 (in comparison to Macklin who lost narrowly on the cards but who I felt did enough to take the title) Murray showed oodles of boxing ability and gave the German a completely different fight to Macklin who was in for more of a tear up.

Sturm subsequently lost his title in a unification bout with IBF titlist Daniel Geale, but the WBA quickly and conveniently stripped the Australian for not facing mandatory ‘regular’ belt holder, Gennady Golovkin. A problem that Sturm himself had created with a string of voluntary defences, but Geale was punished and Golovkin is now the only WBA world champion at 160lbs.

And the WBA can’t have just one world champion at a weight for too long. So cue the ‘interim’ title bout.

It appears to work in Murray’s favour. He showed in the Sturm fight that he belongs in the upper echelons of the division, taking a few by surprise with his mature, confident performance.

And he appears to have a fairly straight forward proposition to get to the belt in Venezuelan, Jorge Navarro.

Navarro is ranked 4 places below Murray by the WBA in 7th but his record flatters to deceive. While sporting an unblemished 12-0 record with 10 KO’s, the quality of his opponents doesn’t stand up to much scrutiny.

In his last outing, Navarro fought a 3-19 Panamanian and his 12 victims boast a combined record or 71-112-7. His ring appearances have seen more tin cans than the Heinz factory it seems.

Murray should be far too much for the South American to handle and an early-mid stoppage is predicted here.

The interim belt will give Murray a platform to challenge for full honours again, potentially against thunder-fisted Golovkin who appears to be one of the most feared men in the division right now.