First off, I would like to say that there is in fact, only one Ricky Hatton. Before I get emails saying that he’s washed up, he was always overrated, this that or the other, name one fighter…As a matter of fact, name one entertainer who was so wildly popular that they could travel overseas to perform and 30,000 adoring fans would follow suit.

I didn’t think so.

You have to respect Hatton for coming back to the sport (after his well documented troubles with cocaine, Guinness, depression and the proper English breakfast) and taking a fight against a man who had only one loss on his ledger. Yes, that loss came to a man who Ricky has already beaten, but as I have pointed out in the past, just because A defeated B and B demolished C does not automatically mean that A will trounce C. It’s simple algebra. Or maybe it’s not so simple.

Ricky could have easily chosen a smaller, less-skilled fighter to look good against for his ring return. But that’s not what a real fighter does; a real fighter challenges himself. Either way, Ricky Hatton and his countrymen were dealt a cold dash of reality in front of a raucous mob of Hattonites when the Ukrainian ended matters with a pulverizing body shot in the ninth.

It was a sad day in Manchester, or so I’m guessing. Ricky used to hang his hat on the fact that he has only lost to the two best pound for pound fighters in the game. I guess now he can say “And Senchenko, too”.

Vyacheslav Senchenko may be the most under appreciated pug of the night; the question now is, who does he fight next? A rematch with Paulie? A couple vanity matches against obscure Eastern Europeans then a money fight with another welterweight title holder? How about a fight with the new king of dirty phone booth fighting, Robert “The Ghost” Guerrero?

In the past I’ve said some less than kind things about Robert Guerrero, his insistence of calling out the sport’s number one fighter, Floyd Mayweather (who, by the way will still never fight him unless he can string together two to three more impressive wins over top names at the weight) has grown tiresome and besides, Floyd will likely be squaring off against Timothy Bradley in his next outing.

Speaking of the undisputed monarch of the Philly shell defense, Andre Berto seemed to take a cue from Floyd in trying to 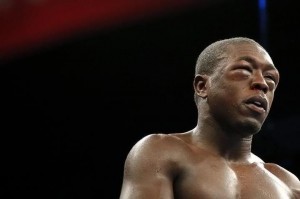 emulate his ultra effective shoulder roll guard, but in doing so he took away something from his usually stellar offense.

Andre Berto showed all the fortitude that you would expect from a two-time champion even after being thumbed in both eyes by an overly smothering and shoe-shining Guerrero.

That’s not to take any luster off of The Ghost’s victory by any means, however, he fought a pretty dirty fight. Perhaps he noticed that Berto’s most effective range is in between long and short and so he kept him inside the gutter as it were, Victor Ortiz style.

While there was holding and hitting on both sides of the equation, it appeared that ref Lou Moret more favored the Ghost’s sometimes cheap tactics. There was one particular sequence where the referee attempted to smack Berto’s hand away from Robert’s back until The Ghost clamped his arm down on to Andre’s arm and proceeded to hold and hit (par for the course in this excellent fight) then Moret seemed to lose interest in breaking them apart.

Not to mention that the first knockdown that Guerrero scored in the opening stanza he happened to have his glove wrapped firmly around the back of the head of Andre Berto as he hit him three to four times until he fell.

Look, I’m not trying to maintain that Lou Moret is a dirty referee. He just had a off night…Or had money on Guerrero.

If you missed the Berto Guerrero scrap I suggest you search it out through your normal means of (il)legal downloading and/or streaming; it was a really gutsy effort from both guys. Mute your computer/T.V. though, unless you would like to enjoy a tall glass of aural vomit with your boxing. I normally enjoy hearing the slightly biased viewpoints from Lampley, Max and co. but the commentary this week was exceptionally bad.