“If everyone is special, then nobody is special,” the saying goes, and by that metric, Miguel Cotto (37-3, 30 KOs) and Austin Trout (25-0, 14 KOs) are fighting for the right to be complete nobodies Saturday night, December 1, at Madison Square Garden. The WBA World Championship is at stake at junior middleweight, which brings up all kinds of existential questions about title belts (more on this later). 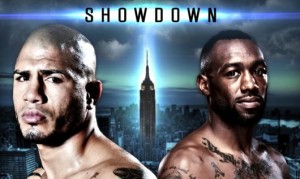 The fight itself is youth and promise taking on age and guile. Miguel Cotto has been in the sport for nearly twelve years now, making his pro debut in January of 2001 against the dubiously-spelled Jason Doucet, knocking the T and E out of him in one round in Texas. Cotto would go on to beat the snot out of 31 more guys in a row before running into the plaster gloves of Antonio Margarito and using his face as an expy for Billy Collins for 11 rounds. The rest is more favorable from a historical point of view; losses to the two greatest fighters on Earth right now (Manny Pacquiao and Floyd Mayweather) and wins over everyone else, including a return engagement in which it is fair to say that Cotto gleefully beat Antonio Margarito into a swollen, battered, “take that, you miserable bastard” mess in the rematch, one of the all-time most sadistic beatdowns in the history of the sport.

Before losing the title to Mayweather in his last fight, Miguel Cotto had gained the “super” championship from the WBA; it is testament to his ability to beat anyone from No. 3 on down in his weight range that he gained that distinction while the smaller Floyd and Manny dominated at welterweight.

Austin Trout does not have nearly the pedigree of Miguel Cotto. Ranked fifth by Boxrec but not nearly as accomplished as that implies (depending on your opinion of everyone from Cornelius Bundrage to Vanes Martirosyan and Erislandy Lara, Trout could sit as low as 11th and still be plausibly rated) the native of Las Cruces, New Mexico has beaten a slew of good-but-not-great fighters on his way to the top five. His biggest scalp to date has probably been a very good Delvin Rodriguez, who got completely outboxed by the much-better Trout in June.

This is a classic “how much does the veteran have left?” question. If Trout is as advertised, and if the loss to Mayweather is as much an indicator of Cotto’s age (32) as Floyd’s superiority as a fighter, then there will be a new sheriff in town at that level below the Mayweather/Alvarez top echelon, an undisputed No. 3 at junior middleweight. If Trout is too inexperienced or Cotto not quite ready to go on the cart for ninepence, then sometime later the boxing media will be writing “how does he handle his first loss” stories about the 27-year-old when next he fights.

Perhaps the most interesting subplot to all this is the WBA title circus involved. Floyd Mayweather is, at least until he vacates the belt to fight who he wants and not who WBA capo Gilberto Mendoza wants him to fight, the WBA’s “Super” world champ. Next week, with the regular title about to be decided, Roberto Garcia is fighting Inocente Fiz for the interim version of that same belt. By the WBA’s own bylaws, whoever unifies the WBA World and another major (IBF/WBC/WBO) belt is named “Super Champion” his ownself, and with relatively easy prey in Cornelius Bundrage and Zayurbek Baysangurov waiting in the IBF and WBO (and a superfight with Saul Alvarez for the WBC crown a possibility after the Martirosyan-Lara draw, especially if Cotto wins), wouldn’t that be delicious candy for the boxing media to explain?

So we’re left with a situation where a sanctioning body has three champions, one of those champions can claim the belt of another one without a fight like some kind of twisted mirror-universe Star Trek adventure (what would the WBA do in that instance?) and the word “interim” will in a week be twisted very far afield of any conceivably defensible dictionary definition of the term.

What to do about all that? Just watch the fight. Enjoy the action. Cotto fights like an angry bear when he’s provoked, and Trout’s an unknown quantity at this point in his career. It’ll be fun. Brace yourself.

Fox Doucette covers Friday Night Fights for The Boxing Tribune. His weekly column, The Southpaw, appears on Thursdays. Fan mail, hate mail, and one of those million-Scoville hot peppers they genetically engineered at New Mexico State in Trout’s hometown can be sent to beatcap@gmail.com.