Much as expected, Tyson Fury, 20-0, 14 KO’s made easy work of motor-mouth Kevin “Kingpin” Johnson, 28-3-1, 13 KO’s, tonight when he whitewashed the American over twelve desultory rounds at the Odyssey Arena in Belfast. 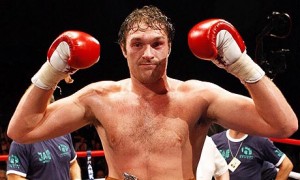 Johnson, as usual, had shouted long and loud pre-fight about being the best this and that in the world, even protesting that we were about to see “the greatest fight in boxing history” before huffing and puffing his way through the contest barely throwing a punch in anger and generally being put to the sword by the UK’s foremost young heavyweight.

There was little in the fight to excite, principally because of Johnson’s chronic lack of ambition – at times Fury himself was so bored with proceedings that he shifted to the southpaw stance and went walkabout, Johnson shuffling after him like a giant, ineffectual pudding. Had the American thrown any punches we might have found out a little more about Fury’s world title pretensions, but all we know is that the Englishman can pump out jabs and right hands for twelve rounds into the face and ample midriff of a static, if immovable, target.

Johnson achieved a share of one round – the seventh – when referee Howard Foster took a point from Fury for hitting on the break, but lost every round otherwise, recalling his abject showing against WBC champ Vitali Klitschko a few years ago. Foster himself was pretty fed up with proceedings when, with the crowd’s boos ringing in his ears, he brought both fighters together at the beginning of the tenth and warned them that “You’re being paid to fight”. Fury stepped things up thereafter, but Johnson remained resolutely in his armchair, achieving nothing more than a grudging respect for staying on his feet.

With arch-rival David Price performing so impressively the night before Fury would have liked to have forced a stoppage, but in truth the big man can hardly be blamed for not doing so – two of the three judges scored the fight a shutout – 119-108 – with one judge, Marcus McDonnell, inexplicably finding one round to score in Johnson’s favour, returning 119-110.

Fury motors on – Johnson will doubtless turn up somewhere down the road in another “fight of the century”.

Earlier in the evening 23 year old Chris Eubank Jnr continued his pugilistic education by taking a wide points verdict from the ever-willing Bradley Pryce, 33-12, 18 KO’s, over eight rounds. Eubank, now 8-0, 3 KO’s, won handily (even if referee Steve Gray’s 80-73 score flattered him), and had some time for a little show-boating, but had to take some shots from the experienced Pryce. Eubank clearly has a deep well of confidence, but he’s in a division brimming with talent on this side of the pond, and may not be quite as good as he thinks he is.