In what I’m quite reluctant to refer to as another chapter in a big year of upsets (Ortiz/Lopez, Bute/Froch, Garcia/Khan and Pacquiao/Bradley immediately come to mind), Austin “No Doubt” Trout successfully defended his ‘regular’ WBA junior middleweight championship against the ever stoic Caguas Crusher, Miguel Cotto. 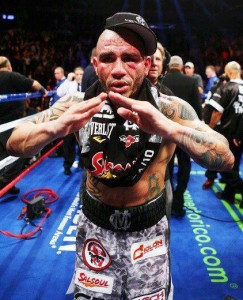 As usual, Cotto looked sharp early, throwing thoughtful counters and displaying good timing when he chose to throw in combination. However, down the stretch of the fight he began to wilt and the pressure of his New Mexican adversary’s accurate punching proved to be too much.

When probed by a horizontal Jim Gray, awkwardly hanging off the side of the ring, for his comment on whether we will see him fight again, Miguel Cotto quickly replied “Prolly” before being whisked away to his dressing room by his family and friends.

What I think is: Miguel’s wonderful fight with Floyd Mayweather perhaps bestowed some false confidence within himself as he seemingly overlooked Trout’s obvious advantages much like Andre Berto slept on the hungry Robert Guerrero one week ago.

Miguel Cotto has begun to show signs of major mileage due to the various gruesome battles he’s had over the years. One or two more fights and that’s a wrap for the Boricua Bomber. Perhaps a fight in his native Puerto Rico (hometown fights seem to be a trend lately) as sort of farewell affair and that’s that.

How about Malignaggi Cotto 2 at the Barclays?

Speaking of Brooklyn, at a recent press conference for their upcoming fight at the Barclays Center, Zab “Super” Judah had plenty of words for a smack-talking Angel Garcia, father of junior welterweight multi-belt titlist Danny Garcia. Some of the aftermath of the comical but uneventful non-melee can be found here along with the most noteworthy siting of the whole conference – Sam Watson (the public face of boxing’s most mysterious shadow leader, Al Haymon) was clad in a maroon velour “The Money Team” track suit ala Grand Theft Auto: Vice City. Class.

It’s quite ironic that Juan Manuel Marquez’s notorious strenth and conditioning coach, Angel Heredia is talking of suing Freddie Roach for defamatory comments about him giving Marquez steroids. Roach was quoted as saying “If his [Marquez] body is natural, I’ll kiss his ass”. The hall of fame coach later retracted his statement; passing the cheating insinuation off as a joke – an easy fix.

What I think is: Floyd Mayweather had to retract his statements as well when Roach’s top pupil, Manny Pacquiao sued members of the Mayweather family for similar statements about Pacquiao using performance enhancing drugs not too long ago. Sometimes life is funny like that.

Also funny, Amir Khan’s next opponent. Carlos Molina is 17-0 against delivery drivers. He’s also spent most of his career at lightweight. “Must win fight” indeed.